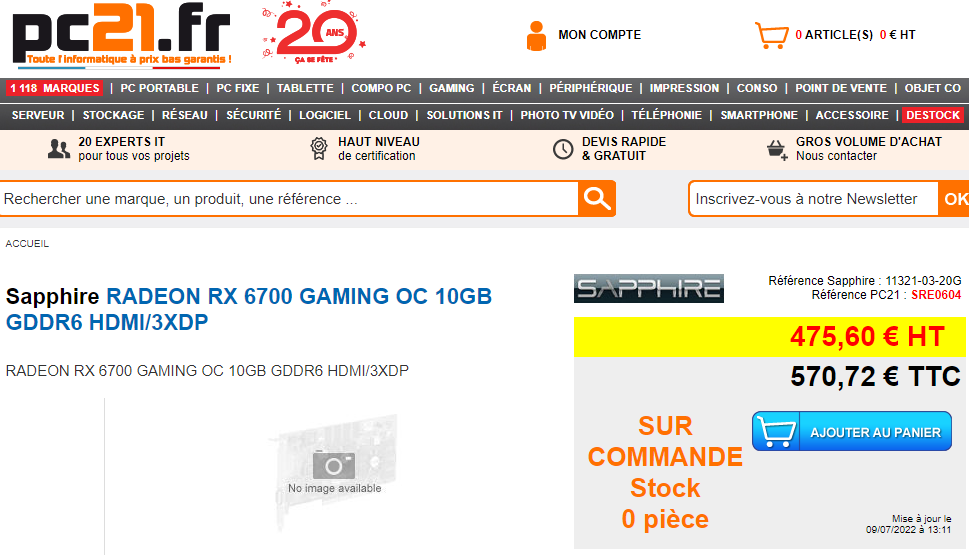 Sapphire became the first company to introduce the latest (and probably the last) model in the AMD family of graphics cards on RDNA 2 architecture - Radeon RX 6700.For some time the novelty was available only in China.Recently, however, the gas pedal was found in the range of some European stores.Image source: MEGAsizeGPUWith the announcement of Radeon RX 6700 kazus occurred.Sapphire presented a video card in its version Pulse a week before the official announcement of AMD itself.Herewith the partner of \"red\" named it in its own way, without RX prefix in the name.To all appearances AMD was not happy with such arbitrariness and as a result Sapphire changed the name of video card to Radeon RX 6700.In spite of this, the first batches of video cards have already been on sale under the made-up name.However, the other day it was spotted in France and Spain, where it is offered for 570 and 580 euros including VAT, respectively.The Spanish retailer PC Componentes is currently on sale, so you can buy the gas pedal for 380 euros.AMD itself did not name the recommended price of Radeon RX 6700, so it is hard to say which of these price tags is closer to the real price. Image source: PCComponentesThe appearance of the Radeon RX 6700 in Europe means that it is no longer a Chinese exclusive.The latter was hinted at by the very quiet announcement of the card in general.The company has not published any press releases or even reported the announcement on Twitter, but simply added the novelty to the database of its official site. Image source: PC21.frThe Radeon RX 6700 is based on the Navi 22 XL graphics chip with 2304 stream processors, 144 texture blocks, 64 rasterization blocks and 36 ray trace acceleration blocks.The reference version of the chip has a base frequency of 1941 MHz and a gaming frequency of 2174 MHz.In Boost mode it goes up to 2450 MHz.The card has 10 GB of GDDR6 memory with 160-bit interface, 16 GB/s per pin and up to 320 GB/s bandwidth.It also features 80 MB of dedicated Infinity Cache memory.The gas pedal consumes 175W.For this purpose, it has one 8 pins auxiliary power connector.The claimed specifications are fully in line with the specialized Sapphire GPRO X080 mining video card, which is devoid of video connectors.Apparently, to make the card gaming, AMD changed BIOS for it and added external video outputs.Image source: VideoCardzTests Sapphire Radeon RX 6700 Pulse in 3DMark Time Spy show that it is about 10% faster than Radeon RX 6650 XT.