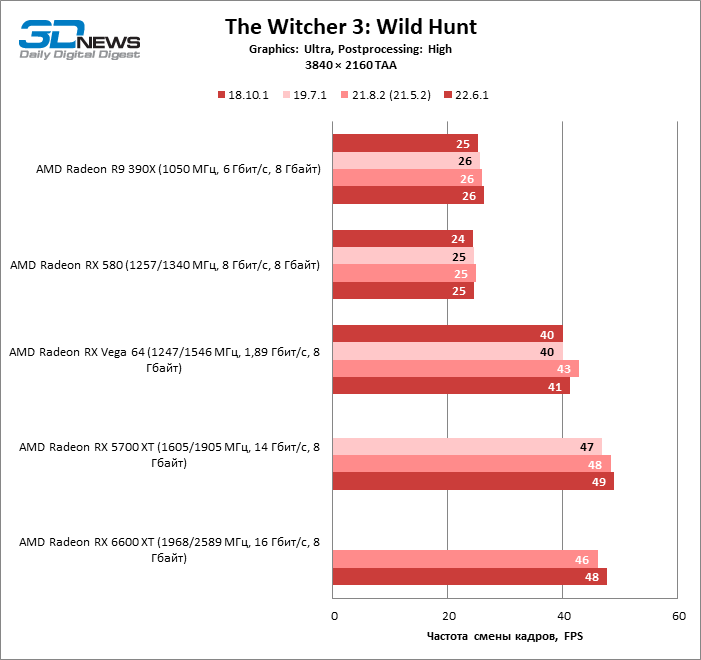 The previous research in which we tested NVIDIA graphics cards using new and old driver versions, starting from the original software that accompanied the GeForce GTX 1080 Ti release, allowed us to make a number of curious observations.It turns out that all \"green\" models of previous generations, contrary to popular theory, not only did not lose in performance, but now work significantly faster than five years ago.Nevertheless, the lion's share of driver improvements falls on the modern Turing or Ampere architecture.And this to some extent explains why formally obsolete, but still powerful devices are no longer as efficient as before.And yet it begs the conclusion that old hardware is turned into a pumpkin by the ever growing appetite of games and the preferential optimization for new hardware, rather than the drivers themselves.To what extent the gap between generations of GPUs in new games has increased - we will definitely check it next time.On the other hand, it turns out that NVIDIA also has unfortunate driver releases, which do take performance away from graphics cards of a particular series, even though all the \"green\" products that we tested in the end and came out in the plus.As for AMD products, it is generally believed that they are the most benefited by time, especially the Polaris and Vega architecture devices.In addition, over the past few years, the Reds have done a noticeable work on the quality of their own software.Let's see to what extent this was reflected in the performance - and whether the surprises that were presented by testing of NVIDIA gas pedals will be repeated.⇡#Test bench, testing methodologyWe chose several video cards of different generations for driver testing.We start with one of the most popular models of all time - Radeon RX 580.On the next steps of performance are Radeon RX Vega 64 (the last example of GCN architecture widely represented on the market), Radeon RX 5700 XT (the first-born of RDNA architecture) and Radeon RX 6600 XT, similar in performance.Finally, we added to the list Radeon R9 390X, which active support of AMD stopped last year.Radeon R9 Fury videocards, alas, were excluded from testing due to small local memory size (4 Gbytes).As in the previous series, all benchmarks had to be performed in old tittles which were already available simultaneously with the oldest driver version to avoid compatibility issues and ensure GPU optimization for test games.Unfortunately, AMD graphics cards drivers themselves do not allow to go as far back as NVIDIA did.The earliest driver that works correctly in the current Windows 10 build dates back to October 2018 (version 18.10.1), while the Radeon RX Vega series, whose debut driver we were going to take as a starting point, came out back in 2017.The next stop was version 19.7.1, which introduced support for the Radeon RX 5700 XT and, consequently, the RDNA architecture.Then we had to use two different drivers for video cards of different series.All devices starting from Radeon RX 580 and newer worked with driver 21.8.1, the first version for Radeon RX 6600 XT, but active support for Radeon R9 390X stopped at that time at version 21.5.2.The current driver 22.6.1 supports all discrete video cards Radeon, starting from 400-series, and, importantly, extends support for Smart Access Memory (that is Resizable BAR) to the family of Radeon RX 5000.Besides, very timely for our testing, AMD published legacy version 22.6.1 which is compatible with old hardware up to Radeon 7000 family.By the way, for the gas pedals older than Radeon 400, the company already doesn't make address optimizations for the latest games, and the legacy driver branch is mainly aimed at removing bugs and vulnerabilities.Test benchCPUAMD Ryzen 9 5950X (4.4 GHz, fixed clock speed all cores)MotherboardASUS ROG Strix X570-E Gaming (Resizable BAR incl.)RAMG.Skill Trident Z RGB F4-3200C14D-16GTZR, 4 × 8GB (3600MT/s, CL17)ROMIntel SSD 760p, 2048GBPower supplyCorsair AX1200i, 1200WCooling system CPUCorsair iCUE H115i RGB PRO HTCaseOpen StandOperating SystemWindows 10 Pro x64GAMEAPIMethod of TestingGraphics settingsFull-screen anti-aliasingDeus Ex: Mankind DividedDirectX 12Inbuilt BenchmarkGraphics quality UltraTAAGrand Theft Auto VDirectX 11Inbuilt BenchmarkMax.graphics qualityMSA 4xRise of the Tomb RaiderDirectX 12Built-in benchmarkGraphics quality Very HighTAATom Clancy's the DivisionDirectX 12Built-in benchmarkGraphics quality UltraTAATotal War: WARHAMMERDirectX 11Built-in benchmarkGraphics quality UltraFXAAThe Witcher 3: Wild HuntDirectX 11OCATGraphics quality Ultra, HighTAA post processing qualityTest participantsThe following graphics cards took part in performance testing:AMD Rad