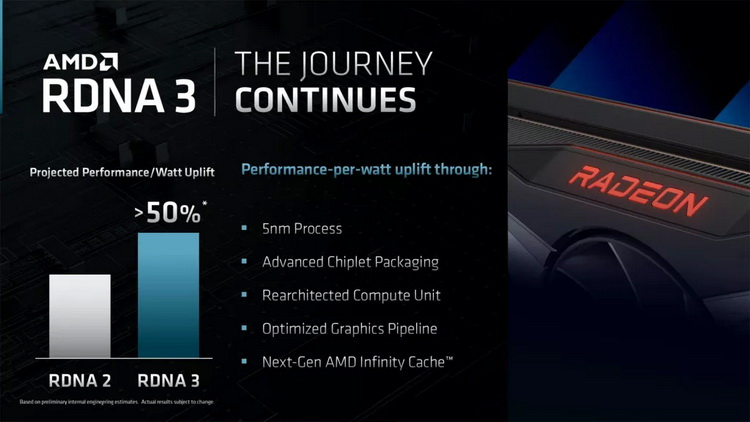 Although AMD announced new graphics architecture RDNA 3 back in June, the manufacturer has not shared any details about the next generation graphics cards, which will be produced on it.Portal Angstronomics, which in the past distinguished by the accuracy of \"predictions\", shared information about the graphics processor series Navi 3x.According to him, the final chip specifications were adopted back in 2020 and have not changed since then.Image source: AMDAccording to the source, the Navi 3x series will use Navi 31, Navi 32 and Navi 33 processors.The first will be used as part of the flagship gas pedals and will be the first GPU to use a chiplet design.It is noted that this processor, labeled GFX1100 (codename: Plum Bonito), consists of one Graphics Chiplet Die (GCD) and six auxiliary Memory Chiplet Dies (MCD) crystals.The GCD chip will be manufactured using TSMC's 5nm process technology, while the subsidiary chips use a 6nm manufacturing process.The Navi 31 processor GCD chip has an area of about 308mm2 and contains 48 WGP (Workgroup Processors) blocks.Each WGP has two Compute Units (CUs).Thus, the total number of CUs in the chip is 96.And the total number of arithmetic logic units (ALUs) as part of the 96 CUs will be 12,288.The area of one MCD chip is about 37.5 mm2.Each MCD contains 16 Mbytes of AMD Infinity Cache memory.Thus, the Navi 31 processor will get 96 Mbytes of Infinity Cache, which is less than the same Navi 21 (128 Mbytes) used at the heart of the Radeon RX 6900 XT/6950 XT.Additionally, it is noted that the Navi 31 supports a 384-bit memory bus.According to Angstronomics, AMD is also considering a modification of the MCD chip with a three-dimensional layout (1-hi), which would double the amount of cache memory.Moreover, if we believe the source, AMD was also thinking about the possibility to release Navi 31 GPU with 288 Mbytes of Infinity Cache (2-hi).However, the company eventually abandoned this idea for financial reasons.According to Angstronomics, AMD may also release a \"trimmed\" version of the Navi 31.In this case, the processor will get 42 WGP units (84 CU or 10,752 ALU).This GPU will also be deprived of one MCD chip, have only 80 Mbytes of Infinity Cache and will support 320-bit memory bus.The flagship gas pedal based on the Navi 31 reference design will be a slightly modified version of the current one.Videocard this design will receive a three-fan cooling system, the height is slightly higher than that of the Radeon RX 6900 XT.As for the power supply, according to Angstronomics, the card can get only two 8-pin PCIe connectors.In other words, the conditional series of graphics cards Radeon RX 7000 not expected to use the new 12+4-pin PCIe 5.0 power connector, which will be used in the same GeForce RTX 4000 from NVIDIA.Image source: Tom's HardwareThe Navi 32 graphics processor labeled GFX1101 (code name: Wheat Nas) is a more compact version of Navi 31.The chip will be used in both desktop and mobile segments of AMD graphics.Its GCD chip will only get 30 WGP blocks with 60 CU blocks (7680 ALU).The Navi 32 processor has only four auxiliary MCD crystals, which limits the Infinity Cache to 64 Mbytes.Again, this is less than the same Navi 22 (Radeon RX 6700 XT), which got 96 Mbytes of Infinity Cache.According to Angstronomics, AMD considered releasing the Navi 32 with 128 Mbytes of Infinity Cache (version 1-hi), but found it unprofitable.The youngest GPU in the Navi 3x series, the Navi 33 labeled GFX1102 (codename: Hotpink Bonefish) is the only one of the three using a traditional solid crystal design whose area is about 203 mm2.According to Angstronomics, AMD at one time wanted to release the Navi 33 with a chiplet design that would get 18 WGP blocks and two MCD crystals.Again, however, it didn't deem this cost-effective.The Navi 33 GPU, like the Navi 32, will be used as part of desktop and mobile video cards.However, the priority for the chip will be a mobile direction.The structure of Navi 33 will contain 16 WGP blocks.In this way it will have 32 processing units (CU) with 4096 ALUs.The feature of Navi 33 is its compatibility with printed circuit boards which were developed for Navi 23 (Radeon RX 6600 XT) processor.The chip will get 32 MB of Infinity Cache and support 128-bit memory interface.According to Angstronomics, the Navi 33 outperforms Intel's most advanced discrete graphics solutions (we're probably talking about the as yet unreleased Arc A770).At