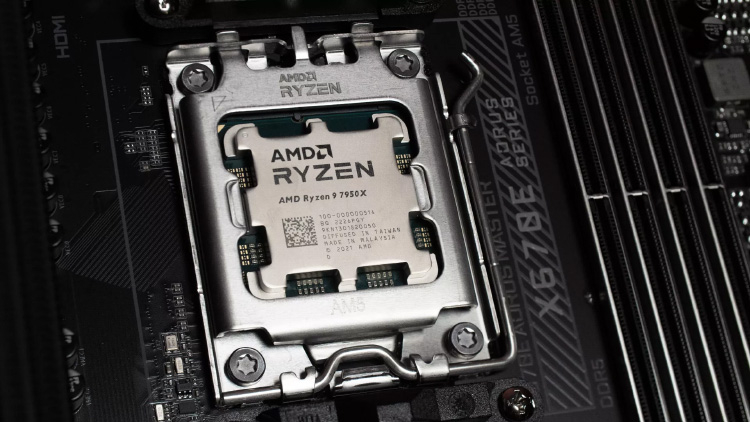 AMD has officially introduced the Ryzen 7000 family of desktop processors.It includes four models with 6, 8, 12 and 16 cores with the new Zen 4 architecture.Their sales will start on September 27.Ryzen 7000 processor family includes four models:Ryzen 9 7950X: 16 cores, 4.5-5.7 GHz, 64 Mbytes L3-cache, 170 W TDP, price - $699;Ryzen 9 7900X: 12 cores, 4.7-5.6 GHz, 64 Mbytes L3-cache, 170 W TDP, price - $549;Ryzen 77700X: 8 cores, 4.5-5.4 GHz, 32 Mbytes L3-cache, 105 W TDP, price - $399;Ryzen 5 7600X: 6 cores, 4.7-5.3 GHz, 32 Mbytes L3-cache, 105 W TDP, price - $299.The main advantage of the new family over the Ryzen 5000 series desktop processors AMD calls increased performance.According to the official data, the Zen 4 microarchitecture provides a 13 percent increase in IPC (specific performance per clock), plus an additional boost in performance gives the clock speed.It has increased up to 5.7 GHz in single threaded mode, which is 800 MHz higher than the maximum frequency of the Ryzen 5000 series.During the presentation AMD said that the older model in the family, Ryzen 9 7950X, is faster than the previous flagship processor, Ryzen 9 5950X, by an average of 40% in demanding applications for creating and processing digital content and 21% - in modern games (at 1080p resolution).Besides this AMD promises superiority in performance of its new 16-core flagship and over Core i9-12900K.According to the company's own tests Ryzen 9 7950X beats it by about 45% in content creation applications and about 9% - in games.Separately it was mentioned that even the junior model in the family - six-core Ryzen 5 7600X - has an average of 5% better gaming performance compared to the competitor's older processor.AMD also paid attention to energy efficiency of new products.The Ryzen 9 7950X is said to be 62% more energy efficient than the Ryzen 9 5950X for equal performance.And when power consumption of these processors is equalized, Ryzen 9 7950X is 49% faster.If we compare with Core i9-12900K, the claimed superiority of 16-core novelty in energy efficiency is up to 47%.Recall, the underlying Ryzen 7000 microarchitecture Zen 4 is a sequential upgrade of Zen 3.As part of it, the main eight-core CCD chip Zen 4 moved to the TSMC N5 process, which allowed AMD to increase its silicon budget to 6.57 billion transistors (versus 4.15 billion in Zen 3).The additional transistors were aimed at doubling the L2 cache size to 1 Mbyte per core, as well as a 1.5-fold expansion of the microoperations cache and implementation of AVX-512 instruction set support (VNNI).Also significant improvements in Zen 4 were made in the input part of the execution pipeline - the bottleneck in the Zen 3 architecture.This, according to AMD estimates, is what provided the lion's share of the 13 percent increase in IPC.Changes have also affected the Ryzen 7000 IO-chip.Its production is switched to TSMC N6 technology, and now it supports PCIe 5.0 bus and DDR5 memory, and has an integrated graphics core with RDNA2 architecture.Because of these changes, as well as increased power consumption limits, Ryzen 7000 processors need new motherboards with Socket AM5 processor socket, which can provide up to 230W of power.All four Ryzen 7000 processors will go on sale September 27 with Socket AM5 motherboards based on the flagship X670 and X670E (Extreme) chipsets.Mid-range chipsets based on B650E and B650 should be expected on the shelves in October.Along with that, memory vendors will release DDR5 SDRAM kits up to 6400 MHz, optimized for Ryzen 7000 and with support for EXPO timings profiles.