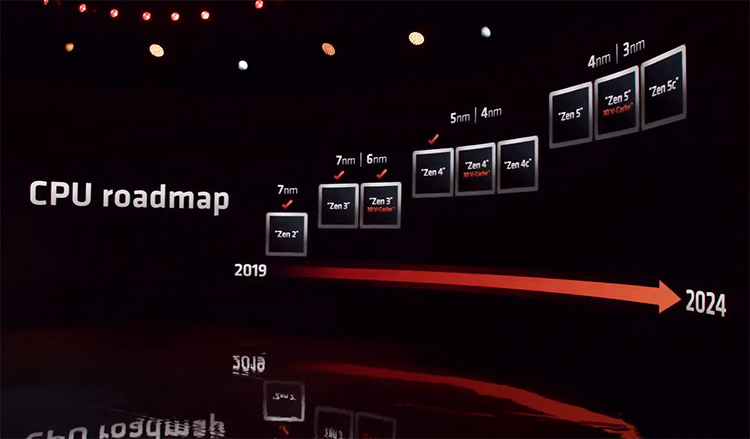 At last night's \"together we advance_PCs\" event, where AMD presented the Ryzen 7000 series desktop processors, some details about the company's future plans were revealed.In particular, the next architecture after Zen 4, Zen 5 will come to the market in 2024.As for the near future, the next big processor announcement from AMD is scheduled for next year - the beginning of next year, the company intends to present a family of mobile Ryzen 7000 processors based on the Zen 4 microarchitecture.Moreover, Mark Papermaster, AMD's technical director, promised during his speech that the Ryzen 7000 processors with additional 3D-cache chip (V-Cache), such as Ryzen 7 5800X3D, will be presented in the future.On the other hand, he refused to give a definite date for Zen 4 server versions with 3D V-Cache technology, but the timing was more definite: these processors will appear in early 2023.At the same time should go and designed for high-density servers processors EPYC Bergamo with Zen 4c-core - these chips, recall, will receive up to 128 cores, while the usual EPYC Genoa with the traditional architecture Zen 4 will be limited to 96 cores.Also AMD representatives mentioned the family of processors Ryzen Threadripper.According to David McAfee, vice president and general manager of customer channels, AMD is looking very closely at releasing Ryzen Threadripper processors on the Zen 4 architecture.However, due to changes in demand patterns and supply chains, we can only talk about variants \"without maximum configurations like Threadripper Pro, but with a broader lineup.\"In addition, David McAfee promised that the Ryzen 7000 desktop processor family will not be limited to four models and will expand.Additional processor models, covering a wider range of price categories, will be released early next year.As for the more distant prospects, the next to Zen 4 architecture Zen 5 is planned by AMD at the end of 2024, the processors based on it will be produced on the 4-nm process technology.According to Papermaster, Zen 5 is a \"complete redesign of the core with further optimizations for AI tasks.\"Along the way, AMD representatives have promised that the new platform Socket AM5, which comes out with the Ryzen 7000 processors, will remain relevant at least until 2025.And this means that motherboards with socket AM5 will support not only Ryzen 7000, but also promising Ryzen processors based on Zen 5 architecture.