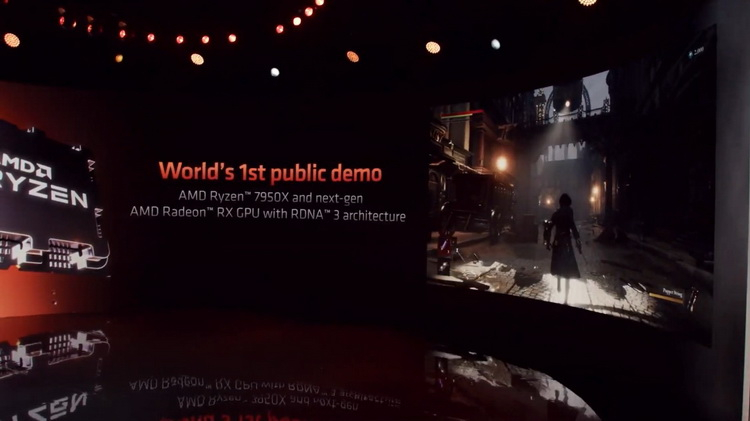 AMD also shared some details about its next generation graphics cards at today's Ryzen 7000 series processor announcement event and even showed a glimpse of one of them.Also the company has demonstrated the RDNA 3 graphics, and announced its release date. The head of AMD Lisa Su (Lisa Su) said that the graphics processors on the RDNA 3 architecture will consist of several crystals (chipsets), made by the 5-nm process.Obviously, to produce them will be TSMC.Glimpses of the shown graphics card is quite large, and by the looks, it seems that we will see the development of the design of reference graphics cards Radeon RX 6000-series - continuity is immediately visible.It was also indicated that the new generation graphics will provide 50% more performance per watt of power consumption than current AMD solutions (Radeon RX 6000 on RDNA 2).During the presentation, Lisa Su also confirmed that the next-generation Radeon graphics is currently being tested in AMD's labs.And its performance is \"amazing.\" The graphics capabilities were demonstrated in the game Lies Of P, which is being prepared by Neowiz Games and will be released in 2023.AMD did not show FPS or any other data about the graphics card performance.It was only noted that the gas pedal was paired with the new flagship - Ryzen 9 7950X.Finally, the head of AMD promised that the next generation graphics cards will be released by the end of this year.More specific terms were not named.