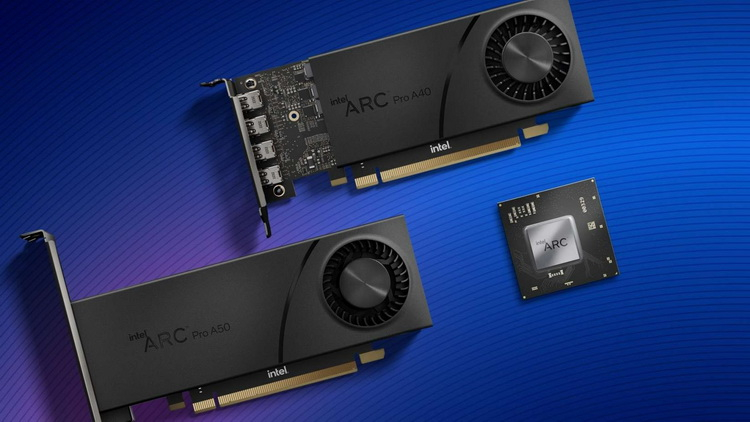 Intel announced Arc Pro A series of professional graphics gas pedals based on Arc Alchemist architecture.It includes the mobile Intel Arc Pro A30M for notebooks, as well as the Intel Arc Pro A40 and Intel Arc Pro A50 for desktop workstations.Image source: Intel Hardware support for AV1 video encoding and decoding is claimed for all models.They are optimized to run various professional graphics applications such as Blender, and are compatible with open source software libraries, such as Intel's oneAPI Rendering Toolkit. All Arc Pro A-series graphics cards introduced received eight ray tracing acceleration cores each.For mobile gas pedal Intel Arc Pro A30M peak performance of 3.5 Tflops in single precision operations is announced.The card has 4 GB of GDDR6 memory and offers support for up to four external video connectors (it depends on the configuration of the notebook where it will be used).The declared TDP range of the gas pedal is 35-50 W. The desktop Intel Arc Pro A40 is a single-slot solution with a peak performance of 3.5 Tflops in single precision operations.The manufacturer has equipped it with 6 GB of GDDR6 memory.The card supports four DisplayPort 1.4 connectors and has a peak TDP of 50W. For the older Intel Arc Pro A50 model peak performance of 4.8 Tflops in single precision operations is announced.The card will occupy two expansion slots in the system case.Like the previous model, it has 6 GB of GDDR6 memory and supports up to four DisplayPort 1.4 slots.The TDP index of this novelty is set on the level of 75 watts. Intel notes that professional graphics cards of Arc Pro A series will be available in workstations of various OEM-manufacturers this year.However, the company did not specify when exactly these novelties will be available on the market.Attendees at SIGGRAPH 2022 will be able to try out Intel professional graphics solutions in workstations from August 8-11.