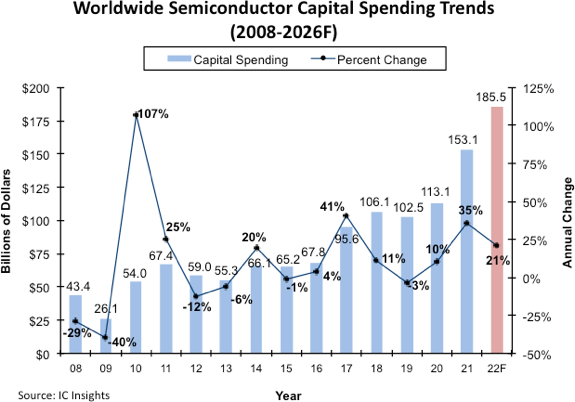 As demand for electronics declines in the consumer sector, it is more common to hear of intentions to cut capital spending from memory manufacturers, which is only natural.Experts note that even caution, which is currently displayed by some market players will not prevent the semiconductor industry from ending the year with a record $185.5 billion in capex.Source image: IntelAccording to IC Insights, analysts expect the growth of CapEx in the industry to reach 21% by the end of 2022.This is less than last year's growth of 35%, and less than the forecasted value at the beginning of this year (24%), but the nuance is that for the third consecutive year, the capital expenditure of the semiconductor industry is growing consistently by double-digit percent.This was last seen from 1993 to 1995 inclusive.Image source: IC InsightsIc Insights analysts previously expected semiconductor capital spending to increase to $190.4 billion this year, but difficult macroeconomic conditions and signs of an overproduction crisis in some market segments suggest that growth will be limited to 21 percent and that spending will not exceed $185.5 billion.In any case, together with the last year market participants will spend an impressive $338.6 billion for the construction of new enterprises.At the same time, conveyors of vertically integrated producers of chips are still loaded more than 90%, and contract manufacturers load their capacities at 100%, still not being able to meet the entire demand.Most likely, as the authors of the forecast summarize, next year the industry will face a decrease in the amount of capital expenditures, as market participants will need to assess the situation after three years of active growth.