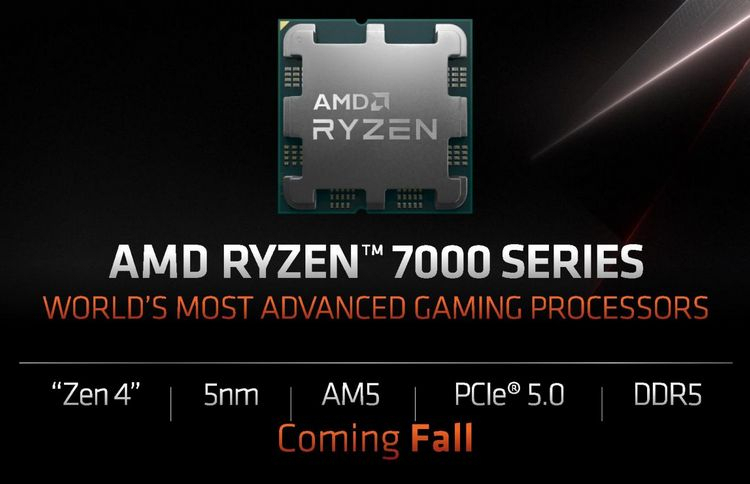 Less than 24 hours to go until AMD's event to unveil its next generation desktop processors, the Ryzen 7000 series chips.The novelties will offer a new architecture, will use a completely new platform, and a lot of other advantages.The presentation will be held this coming night, beginning at 2:00 Moscow time on August 30.You can follow the event via official AMD YouTube channel.AMD company has already announced some details about the upcoming products in May.It is known that Ryzen 7000 processors will be based on a new Zen 4 architecture, and their chips with cores will be made by 5-nm process technology.Yes, new items will inherit the layout of several crystals from their predecessors.Separate chip with I/O interfaces will be produced by 6-nm processor.From previous AMD announcements we know that architectural changes will provide IPC (instructions executed per clock) increment only by 8-10%.But thanks to transition from 7nm to 5nm process technology was able to significantly increase clock speeds.AMD itself promised that Ryzen 7000 will be able to automatically overclock above 5.5 GHz.Obviously, we are talking about dynamic overclocking of individual cores, but still the level is impressive.And the rumors were pointing at 5.7 GHz.As a result, single-core performance should increase by more than 15%, and overall performance (multi-core) will increase by more than 35%.And AMD also promised a significant improvement in terms of power efficiency - the increase in performance per watt will be more than 25%.At the same time, the TDP level will be up to 170 W, which is noticeably higher than the previous maximum 125 W.AMD is expected to unveil only four models.These will be the 16-core Ryzen 9 7950X, the 12-core Ryzen 9 7900X, the eight-core Ryzen 7 7700X and the six-core Ryzen 5 7600X.Of course, SMT (two threads per core) support will be provided in all cases.It is also reported to support AVX-512 instructions.A notable feature of the new generation of AMD Ryzen will be the presence of integrated graphics in all desktop models - previously it was only in the desktop chips Ryzen G-series.There will be applied graphics on RDNA 2 architecture.Another important difference Ryzen 7000 from its predecessors will be the fact that they will work with a completely new CPU socket AM5.This is a LGA socket with 1718 pins.New socket allows to support the latest DDR5 RAM, as well as PCIe 5.0 interface for both graphics card and M.2 SSD.AMD has introduced three chipsets for new motherboards with Socket AM5: the flagship X670E, the powerful X670 and the average B650.AMD partner manufacturers have already introduced many different motherboards for the upcoming Ryzen 7000.By the way, new CPU socket will be compatible with most coolers for Socket AM4.