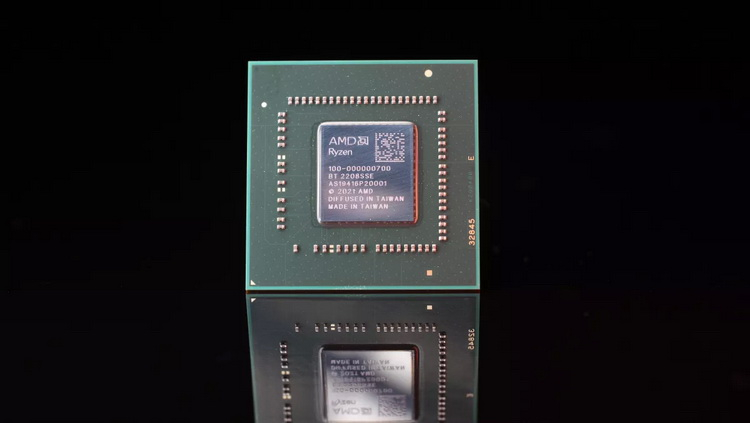 AMD has formally announced entry-level mobile processors codenamed Mendocino back in May this year.These chips are based on Zen 2 architecture and feature integrated RDNA 2 graphics.Today, the manufacturer has officially unveiled three models of processors, which are included in the new AMD 7020 series.Image source: AMDWhile Intel refuses to use Pentium and Celeron brand for its entry-level processors, AMD still uses Ryzen and Athlon for entry-level consumer CPU models.True, as previously reported, it has switched to a new numbering for mobile processors.The oldest model in the AMD 7020 series is the quad-core and octa-core Ryzen 5 7520U with a frequency range of 2.8 to 4.3 GHz.The chip got 6 Mbytes of cache memory (4 Mbytes L3) and integrated Radeon 610M graphics.The Ryzen 3 7320U got the same number of cores and virtual threads, but operating in the 2.1 to 4.1 GHz frequency range.This processor also has 6 MB of cache memory and integrated graphics Radeon 610M.The third model in the series is the Athlon Gold 7220U.It is a dual-core processor with support for four virtual threads.It runs in the frequency range from 2.4 to 3.7 GHz, has 5 MB of cache memory and uses built-in Radeon 610M graphics. All three new products offer support for up to 32GB of LPDDR5 memory and have a configurable TDP from 8 to 15W.Support for NVMe SSDs in BGA format is also noted.AMD 7020 (Mendocino) series processors provide up to 31 percent faster application launching, compared to competitors.As an example, AMD compares the performance of quad-core Ryzen 3 7320U with dual-core Intel Core i3-1115G4 generation Tiger Lake.In PCMark 10 test, which simulates work in office applications, new product AMD was 31% faster chip Intel, in multi-threaded performance test Cinebench R23, it showed a 58% higher result, and with the archiving files in 7-Zip Ryzen 3 7320U coped 80% faster.The manufacturer does not specify, but built-in graphics processors, very likely, has in its composition two executive units and built-in hardware decoder AV1.According to the manufacturer, the \"embedded\" Radeon 610M can provide in games at 720p resolution performance at 60 frames per second.Unfortunately, AMD did not share graphs of the integrated graphics core performance, but claims that on a notebook with an Athlon 7220U configuration, 4 GB of RAM and solid NVMe-storage in the game League of Legends system provides 84 frames per second, in Counter-Strike: Global Offensive - 97 frames per second, and in Dota 2 - 61 frames per second.Mendocino series chips have built-in Microsoft Pluton security coprocessor, and also support various useful functions.For example, support for voice wake-up and fast charging is announced.Laptops based on AMD Mendocino processors will be able to offer up to 12 hours of battery life in a mixed use scenario.Both Microsoft Windows and Google Chrome OS will be offered as the operating system.The first AMD Mendocino-based devices are expected to come out in the fourth quarter of this year, and the first notebook models to get them will be the Acer Aspire 3, Lenovo IdeaPad 1 and an unnamed 17-inch HP laptop.