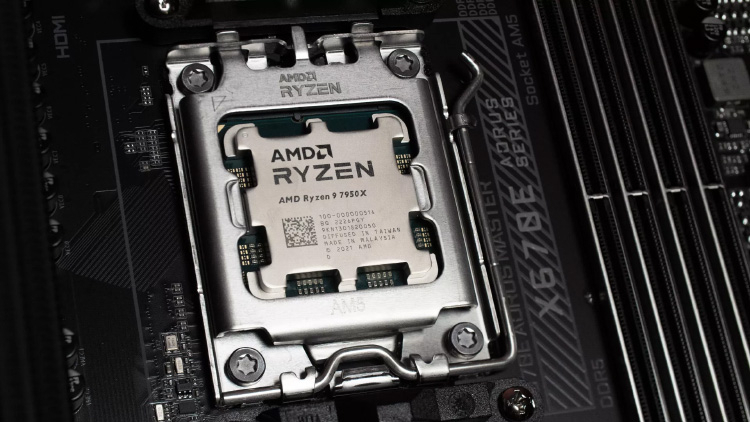 AMD Ryzen 7000 series processors have not yet gone on sale but are already actively setting new records in various benchmarks, as evidenced by HWBot ratings.Earlier this week it was reported about four records set by Ryzen 9 7950X with liquid cooling, and now Tom's Hardware writes that some of those records have been surpassed - with Ryzen 9 7950X and liquid nitrogen.For starters, let us remind you that Ryzen 9 7950X with Corsair H115i liquid cooling system with 280mm radiator enthusiasts managed to overclock all 16 cores to 5.35-5.5GHz.This allowed them to update 16-core processor records in multi-threaded benchmarks such as Cinebench R23, Cinebench R20 and Cinebench R15 as well as in the 7-Zip archiver test. Now AMD Ryzen 9 7950X flagship is overclocked even more, but in extreme conditions with liquid nitrogen.In multi-threaded Cinebench R23 test AMD processor was overclocked to 6.45GHz and gained 48,235 points, 16.2% over the maximum score of Core i9-12900KS, also overclocked with liquid nitrogen. On the other hand, Ryzen 9 7950X overclocked to 6.5GHz in Cinebench R20 test and achieved 18,605 points.This is 15.8 % more than the previous best result achieved by liquid nitrogen cooled processors (Ryzen 9 5950X to 6 GHz).We should note that obviously more record updates are waiting for us in the near future, as it usually happens with the release of new generation processors.Ryzen 7000 will be released on September 27.Also in the second half of October we expect the release of Intel Core 13th generation processors (Raptor Lake), which will also compete for new HWBot ratings records.