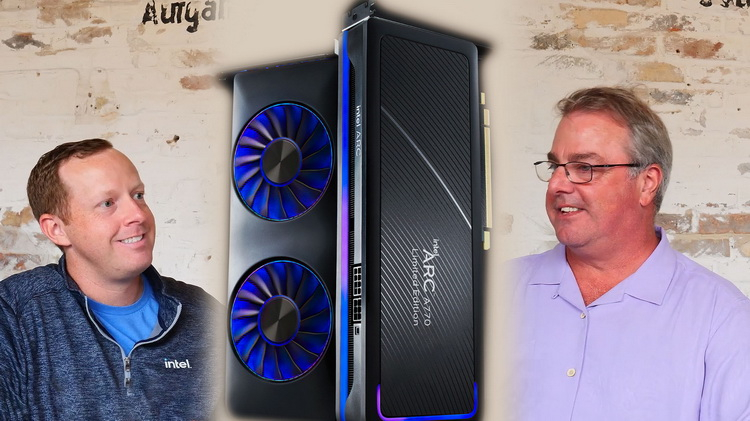 Intel's Tom Petersen and Ryan Shrout officially confirmed in an interview with PC Games Hardware and Digital Foundry that the company will be releasing two more discrete graphics cards, the Arc A770 and Arc A750, very soon.It was noted that the performance of senior Arc A770 model is between the NVIDIA GeForce RTX 3060 and GeForce RTX 3060 Ti, and that it is faster than AMD Radeon RX 6600 XT graphics card.Image source: VideoCardzThe statements of Intel representatives mean that Intel will not be opposed to the Arc A770 senior solutions AMD and NVIDIA - it will compete in the middle segment.Intel officials reiterated earlier statements that the Arc graphics cards' performance in ray traced games is on par with similar NVIDIA graphics cards on the Ampere architecture.Petersen, who was unveiled in an interview, said that the current performance level of Intel Arc A-series graphics cards \"cannot be changed significantly\".If there will be any performance improvements, they will only be minimal.The company can't change the price of video cards, but it can control their prices.Due to this, A-series gas pedals will be competitive, according to Intel.Image source: PC Games HardwareThe company specifies that the Arc A770 model supports configurations with 8 and 16 GB of video memory.The version of the videocard Limited Edition (limited reference edition) will be available only with 16 GB of memory.In other words, Intel partners will have the right to choose which amount of video memory to install in this or that version of the video card.For the Arc A750, the company has confirmed the use of 8 GB of memory.Intel continues to work on optimizing drivers for systems that do not have support for Resizable BAR (ReBAR) technology.But in general, Petersen advised owners of older PC configurations (without ReBAR support) to opt for graphics cards from other vendors.Arc GPUs are optimized to handle large data packets, but are inefficient at transferring data in small blocks.The result is a nearly 40% drop in performance without ReBAR.And this problem is unlikely to be solved by the first generation of Arc graphics cards on the Alchemist architecture.However, the company will pay attention to this issue during the development of future graphics architectures.Image source: Digital FoundryTom Petersen said that the Arc A770 and A750 models in the Limited Edition reference version will be available for purchase through the Intel website.The company plans to hold a simultaneous launch of the gas pedals with its partners.He never said who exactly is among them, but once again noted that \"the launch will happen soon.\" In addition, he said that the launch is expected \"only in key markets,\" including Germany.The company admits that the exclusive launch of the Arc A380 graphics card in China was not the best idea.Intel overestimated the media interest in its GPU, thinking that western publications, despite the difficulties, would find the desire and ability to buy entire PCs with an Intel graphics card from China.Recall that the Arc A380 was originally only sold as part of complete systems, and only a few months later began to be sold as a separate product.Image source: VideoCardzPetersen also confirmed that the delayed launch of graphics cards Arc A-series is not due to problems in the supply chain.It has to do with the unavailability of the gas pedals.Earlier it was reported that the reason for the delay of Intel discrete graphics cards could be the company's departure from Russia.