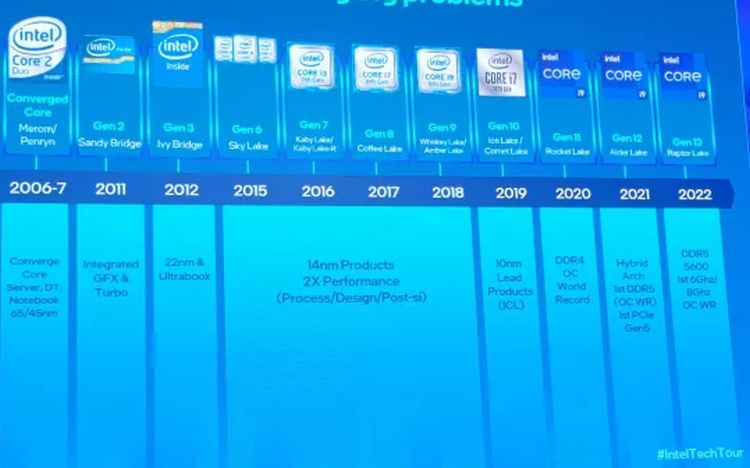 Intel held an Intel Technology Tour press event in Israel this month, where employees from the local office talked about their achievements in developing both past and future generation central processing units.The Raptor Lake family is the brainchild of Intel's Israeli engineers and they proudly announced that the processors are overclocked to 8GHz.Image: Intel, Tom's HardwareThe figure may seem impressive to the untutored layman, but keep in mind that such experiments usually involve using liquid nitrogen to cool the processors and you can't expect to get any serious payload at that frequency range.Moreover, not even all of the processor's processing cores are usually active when reaching a record frequency.The progress of the Raptor Lake family, based on achieving a frequency of 8 GHz with liquid nitrogen, also not so great - at least the statistics overclocking Intel Core i9-12900KS processor contains evidence of reaching 7.8 GHz in June this year with the activity of eight cores and eight threads.It turns out that the successor was able to surpass this result by 200 MHz.Not the fact that the frequency of 8 GHz is limited, of course, because practice shows the ability of individual instances of processors of the new family in the future to improve the results of extreme overclocking in comparison with the debut experiments, which usually involve the use of early engineering samples.In the Intel processor history the 8GHz milestone is not unique either, as Cedar Mill's Celeron D generation processors once hit the 8.5GHz milestone, even though they were manufactured using the \"mature\" 65nm technology.Along the way Tom's Hardware representatives point out that Raptor Lake processors can dynamically boost frequencies to 6.0GHz using standard cooling systems.That's 500 MHz higher than the default limiting frequency of the Core i9-12900KS processor, which is considered the flagship of the Alder Lake line.However, the Intel presentation slides from the day before mentioned only 5.8 GHz as the Raptor Lake limiting frequency.Perhaps the beautiful value of 6.0 GHz is achieved for one or two active cores in a special mode of operation.