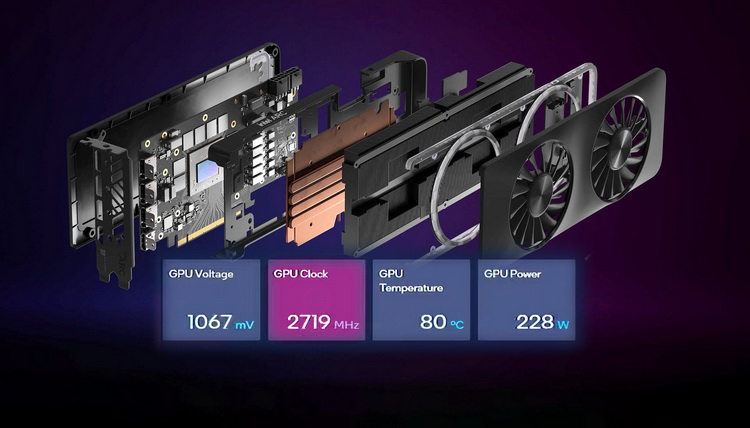 Intel continues to educate the public about its Arc A770 and Arc A750 gaming gas pedals, giving away information bit by bit.Earlier, the company announced the official specs of the graphics cards, and shared their performance data with ray tracing and XeSS scaling technology.Now, Ryan Shrout and Tom Petersen from the company have shared information about how to manually overclock these graphics cards.Image source: IntelAs usual, manufacturers rarely talk about manual overclocking, let alone talk about the potential of one or another video card from them.Intel has decided to go against the long-standing tradition.Ryan Schrout and Tom Petersen showed overclocking of the reference Arc A750 through the proprietary Arc Control app, increasing the GPU Power Limit from 185W to 228W and changing the voltage settings. The graphics card was overclocked using its regular cooling system.In the end, the graphics chip frequency was increased to 2719 MHz.To test it, the game Hitman 3 was run.The overclocking did not result in any significant increase in game performance.Before the manipulations with GPU frequency settings, the card was producing 90 frames per second, and after that - 95-96 frames per second.The temperature of the GPU itself rose to 81 degrees Celsius after overclocking, and the temperature of memory chips - to 88 degrees. Intel representatives also showed the flagship gas pedal Arc A770 Limited Edition apart.As it turned out, the reference version of the graphics card is equipped with a cooling system, which includes a solid aluminum radiator, copper evaporation chamber, as well as four flat heat pipes measuring 10 × 3 mm. The entire design is cooled by two fans.According to Intel, the noise level of the cooling system is less than 39 dBA.In the reference version, the Arc A770 has RGB backlighting. The reference Arc A770 motherboard has a VRM subsystem with six power phases, eight GDDR6 memory chips (total capacity of 8 or 16 GB), three DisplayPort 2.0 connectors, as well as one HDMI 2.1 port, which provides chip PCON.Non-reference variants of Intel's Arc graphics cards may also be equipped with an HDMI 2.1 connector, but it will be up to manufacturers themselves if they wish to use an additional PCON chip in their circuitry.Additionally on the reference Arc A770 one 8-pin and one 6-pin power connectors can be noted.