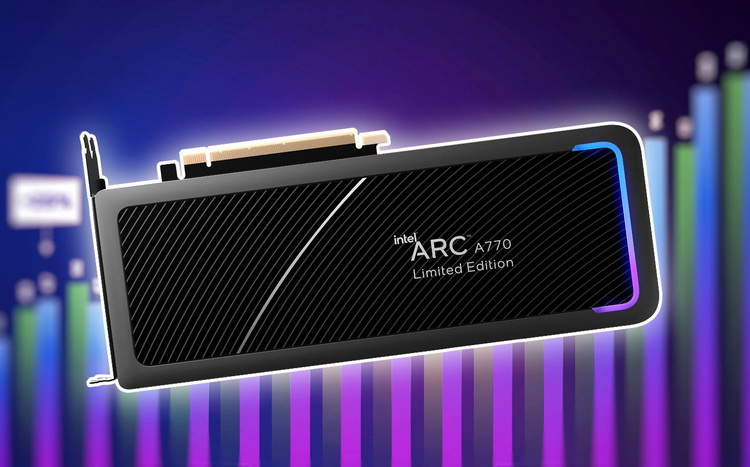 To prove its claim that its Arc Alchemist graphics performs better at ray tracing than comparable NVIDIA GeForce RTX graphics cards, Intel has revealed performance of its flagship Arc A770 gas pedal compared to a GeForce RTX 3060 graphics card.Image source: IntelAccording to Intel's internal tests, the Arc A770 is on average 14 percent faster than the GeForce RTX 3060 in games at 1080p resolution and ray tracing.However, in at least four games from the list of tested titles NVIDIA's solution was still faster. Intel Arc A770 vs NVIDIA GeForce RTX 3060The GeForce RTX 3060 graphics card has 28 RT cores.Intel has not yet announced official specs for the Arc A770.However, it is assumed that it uses a full-fledged version of the processor ACM-G10 with 32 cores Xe and the same number of blocks of hardware ray tracing.Image source: VideoCardzIntel also first shared the official performance test cards Arc A-series with active technology time scaling image Xe Super Sampling (XeSS).It should be recalled that the company had promised to release it \"in early summer.The summer ended and the fall came, but so far the support for XeSS has not appeared in any game. Today, the company published the data on the performance of XeSS, which operates in two modes: Balanced and Performance.In total there will be four modes.The other two, Quality and Ultra Quality, were not included in the comparison.The \"Performance\" mode allows in some cases (Hitman 3 and Ghostwire Tokyo) a doubling of frames per second.In general, however, the FPS gain range is between 49% and 113% over the original resolution.In \"Balance\" mode, the frame rate increases from 26% to 77%. The Intel Arc Alchemist architecture uses a new type of Thread Sorting Unit cores, which are responsible for asynchronous ray tracing.In other words, they help maximize the use of Xe cores by distributing tracing tasks in the graphics pipeline to improve efficiency and performance.Arc Alchemist arc-ray-tracing-hardware-1 ray tracing pipeline on Intel Arc Alchemist graphics cards.jpg See all images (4) asynchronous-ray-tracing-1.jpg INTEL-ARC-GPU-RAY-TRACING-1.jpg thread-sorting-ray-tracing-1.jpg See all images (4) The company has also added that support for its ray tracing technology will appear in the game Gotham Knights, which will release on October 21. I'd like to believe that by that time Intel's senior graphics cards will be available for sale.