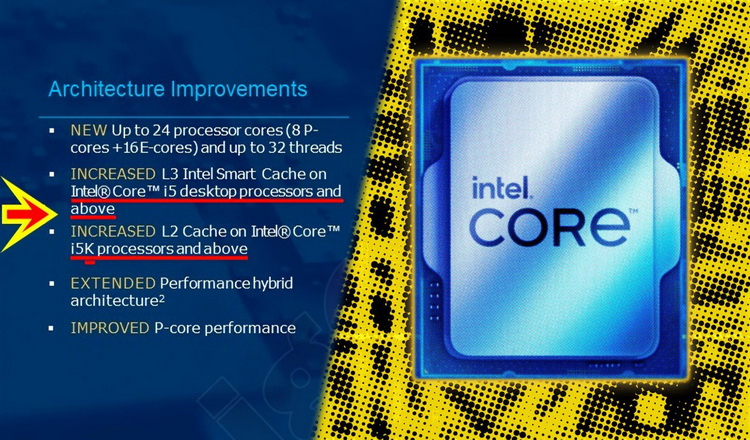 Another leak of Intel slides has confirmed earlier rumors that some models of Intel's 13th generation Core (Raptor Lake) processors will be built on older chips from Intel's 12th generation Core processors, aka Alder Lake.Image source: VideoCardzIt has been previously reported that the Core 13th generation Core processors will use three types of chips, with stepping B0, C0 and H0.The first will be used in all Core i9, Core i7 and older Core i5 with a \"K\" suffix.And the rest of Core i5 will get C0 chips, and base Core i3 will get H0 chips.Already then, it was assumed that only B0 chips will be built with new performance P-core Raptor Cove and energy efficient Gracemont E-core.The rest of the chips use Golden Cove and Gracemont cores, respectively, which are already used in Alder Lake processors.Now these rumors are indirectly confirmed. Image source: Igor'sLAB / 3DCenter.orgIntel's slide which has appeared in the Network confirms that the Raptor Lake processors will differ on the architectural level, as indicated by the increased amount of L2 and L3 cache memory on the higher chips.According to the slide, the increased L3 cache will get Core i5 processors and older, and the increase in L2 cache is announced only for the new Core i5 with \"K\" suffix and older chips.In other words, all of the newer generation CPUs will offer the same amount of cache as their predecessors.The Gracemont small E-core clusters in the Alder Lake processors each have 2 MB of L2 cache memory.Earlier leaks suggest that Gracemont cores in Raptor Lake chips will each have 4 Mbytes of L2 cache.Using the old Alder Lake (Golden Cove) architecture in the new Core i5-13400, Core i5-13500 and Core i5-13600 processors means they will have less IPC than models with Raptor Cove cores, which in turn will reduce their potential against new AMD Ryzen 7000 processors.