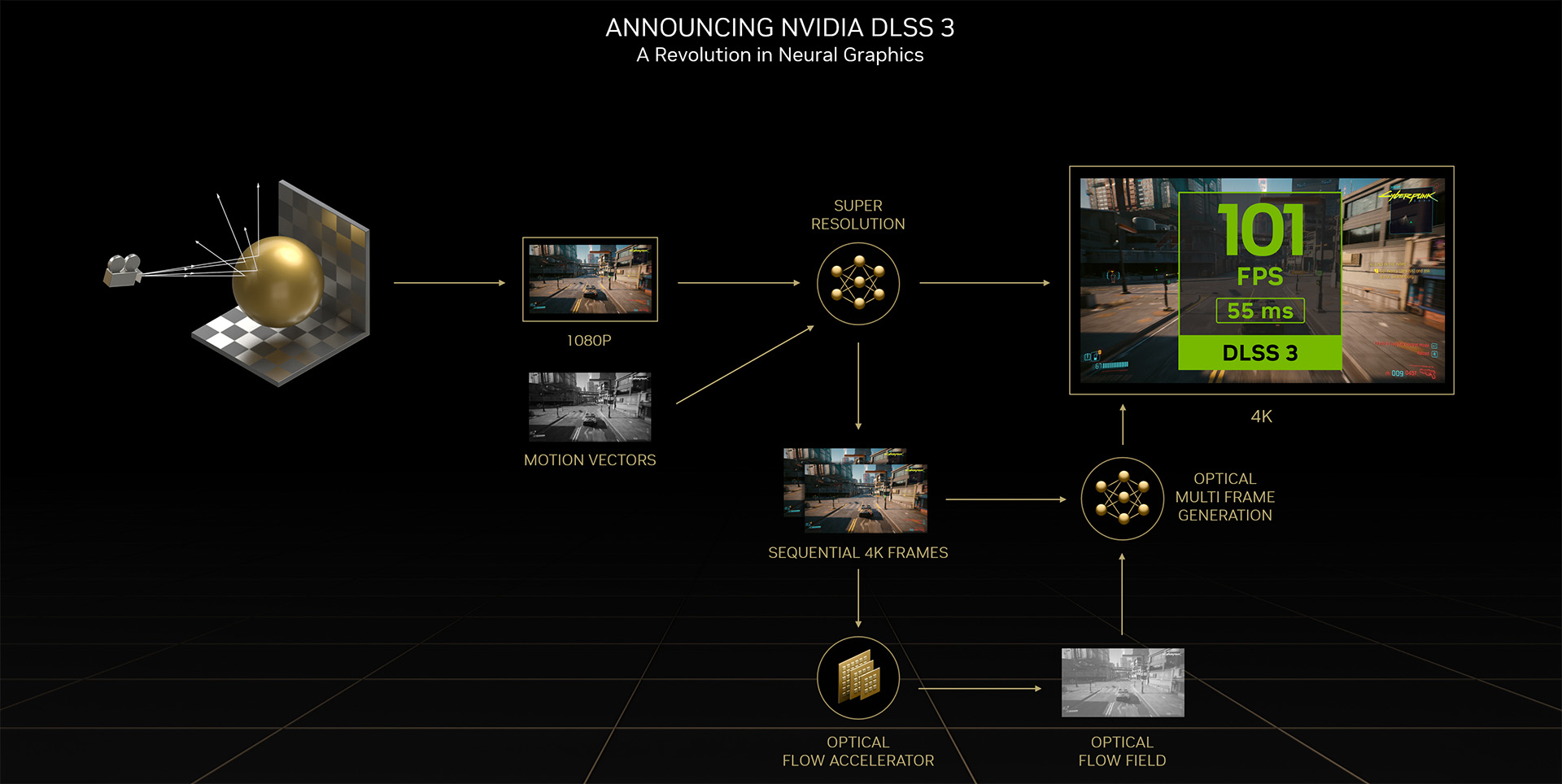 Along with the Ada Lovelace architecture and GeForce RTX 4000 graphics cards, NVIDIA has announced DLSS 3 upscaling technology, which, according to the company, can improve gaming performance by four times (compared to conventional rendering at the target resolution).NVIDIA promises a rapid implementation of the new technology: the first games with DLSS 3 support will appear in October. DLSS 3 technology is a further development in NVIDIA's family of AI scaling algorithms.DLSS 3 differs from previous versions of the technology in that it can now not only generate additional pixels in existing frames when increasing the resolution, but also build entirely new intermediate frames.When upscaling, DLSS 3 handles four types of data: current and previous frames, the optical flow field, as well as game engine data such as motion and depth vectors.The optical flow field is a completely new element in upscaling technology and is created by an optical flow hardware gas pedal added to the Ada Lovelace architecture.Optical flow analysis involves sequentially comparing image frames and identifying relationships between pixel movements and objects (particles, reflections, shadows, etc.).Comparing this data with motion data taken from the game engine allows you to accurately recreate the changes in geometry occurring in the scene. The AI algorithm in DLSS 3 analyzes the information from all sources and chooses which data is best used for scaling and for building intermediate frames in each case.DLSS 3 actively uses the hardware features of the Ada Lovelace architecture - not only the optical stream gas pedal, but also the new fourth-generation tensor cores.Thus, DLSS 3 technology is dependent on the new architecture and will only be available on GeForce RTX 4000 series graphics cards.NVIDIA has shown how DLSS 3 works, using the pre-release version of Cyberpunk 2077.When you activate DLSS 3, the FPS growth reached four times, while the frame delay was cut in half without any apparent decrease in image quality.A great advantage of DLSS 3 is that the technology allows you to increase the frame rate even when the bottleneck in the system is the CPU.Building intermediate frames allows you to increase FPS in CPU-dependent games with a large open world.For example, during the demonstration in Microsoft Flight Simulator game, the frame rate with DLSS 3 enabling doubled.Also NVIDIA shared the summary results of DLSS 3 performance tests in a number of other games. DLSS 3 has received support from major game and engine developers, and will be added to more than 35 titles in the first phase, including A Plague Tale: Requiem, Cyberpunk 2077, Microsoft Flight Simulator and Warhammer 40,000: Darktide.