Official Intel Raptor Lake processor specifications - up to 24 cores, up to 5.8GHz and up to 253W 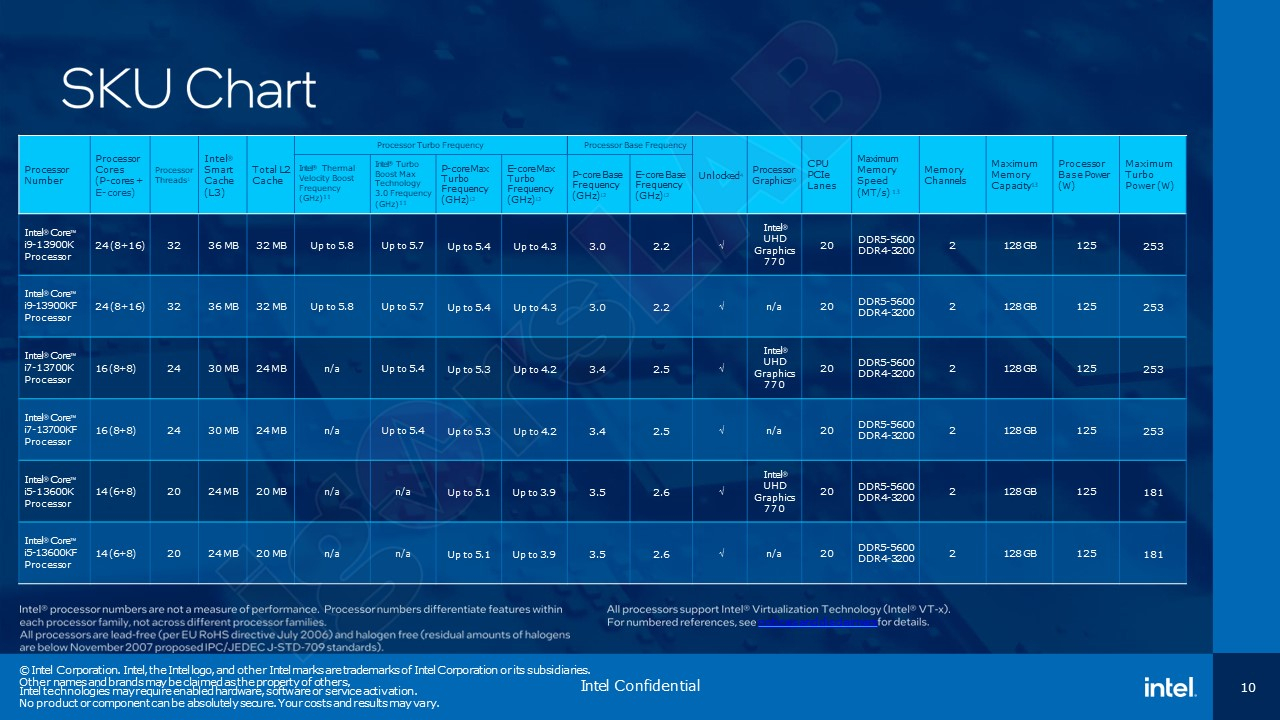 The official announcement of the 13th generation Intel Core desktop processors (Raptor Lake-S) will not take place until the end of September, but their full specifications have already appeared on the web, published the corresponding slides by Igor'sLAB resource.Novelties will offer up to 24 cores, frequency up to 5.8 GHz, and power consumption level up to 253 W. Image source: igorslab.deThe slides show only six senior models, representing the K and KF series.Probably only these models will be announced at the upcoming event, and the rest will have to wait for a while.Intel's flagship Core i9-13900K and i9-13900KF processors will be 24-core - 8 efficient (P) and 16 efficient (E) cores, giving a total of 32 threads.Thermal Velocity Boost (TVB) technology will provide automatic overclocking up to 5.8GHz, but manually the frequency can be raised even higher.In addition, the chips will support DDR5-5600 and DDR4-3200 memory. More affordable Core i7-13700K and i7-13700KF will offer 16 cores (8P + 8E) and 24 threads, and peak frequency up to 5.4GHz.TVB support is no longer available here, but manual overclocking is not going anywhere.It's noteworthy that this did not affect the power consumption: the same 253 W.The last six models i5-13600K and KF get 14 cores (6P + 8E), 20 threads and a frequency of up to 5.1 GHz.Unlike older processors, the junior duo also lacks Turbo Boost Max 3.0 support.The maximum TDP is 181W, while nominal TDP of all six chips is the same - 125W. Judging by the slides, the most noticeable innovations of 13-th generation Core chips are the support for faster memory DDR5-5600 without overclocking (it was DDR5-4800) and a larger number of cores.The Z790 platform will get the number of PCIe Gen4 lanes increased to 20 by reducing the number of Gen3 lanes.The processors of new generation will be released in October, and their official announcement is scheduled for September 27th during the Innovation event.