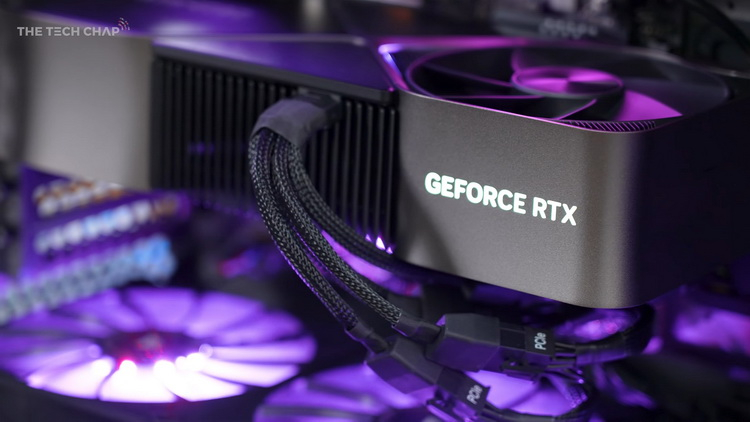 GeForce RTX 4090 graphics card was tested in games at 8K resolution.For this purpose, YouTube channel The Tech Chap assembled a new computer based on Ryzen 9 7950X and flagship Samsung TV supporting the appropriate resolution - 7680 × 4320 pixels.Image source: YouTube / The Tech СharIt should be noted that when the flagship graphics card of last generation GeForce RTX 3090 was announced, NVIDIA has positioned it as \"the first solution for gaming in 8K\".However, two years after its release, displays with support for 8K resolution have still not conquered the market.Such solutions remain niche and very expensive.Most display manufacturers produce monitors with resolution up to 4K, sometimes there are 5K models.And 8K is found only in televisions, and they can be considered a rarity.But YouTube channel The Tech Chap decided to see how GeForce RTX 4090 copes with 8K.Test system was equipped with a flagship 16-core Ryzen 9 7950X on architecture Zen 4, motherboard ASUS ROG Maximus X670E Hero and 32 GB RAM standard DDR5-6200.The PC was connected to a 65-inch Samsung Neo QLED QN800B 8K TV for $3500. The graphics card performance was tested in today's demanding games such as Cyberpunk 2077, Flight Simulator, Forza Horizon 5 and others.In Cyberpunk 2077 flagship GeForce RTX 4090 provided 8K speed up to 65 frames per second, but only with activated AI scaling DLSS 3 - without it the game at this resolution did not go.In turn, GeForce RTX 3090 was able to provide only 28 FPS, also only with DLSS.True, the old flagship uses less advanced DLSS 2.1. In Microsoft Flight Simulator the result of GeForce RTX 4090 at 8K resolution was 81 frames per second.Also with activated AI scaling.In its turn RTX 3090 showed nearly twice less result - 46 FPS. In Forza Horizon 5 game the average performance of new flagship in 8K was 76 FPS without DLSS.Also the card was tested in Overwatch 2, where it gave 520 FPS.This is twice as much as the GeForce RTX 3090 at the same settings.DLSS was not used in this test as well. Call of Duty: Warzone and Crysis Remastered also took part in the tests.In the latter case DLSS and ray tracing were activated.GeForce RTX 4090 in Crysis Remastered at 8K resolution showed 65 FPS, and in CoD: Warzone - 117 FPS. Also recall that yesterday published a full review of the flagship graphics card GeForce RTX 4090.The main points from them can be found in a separate article.