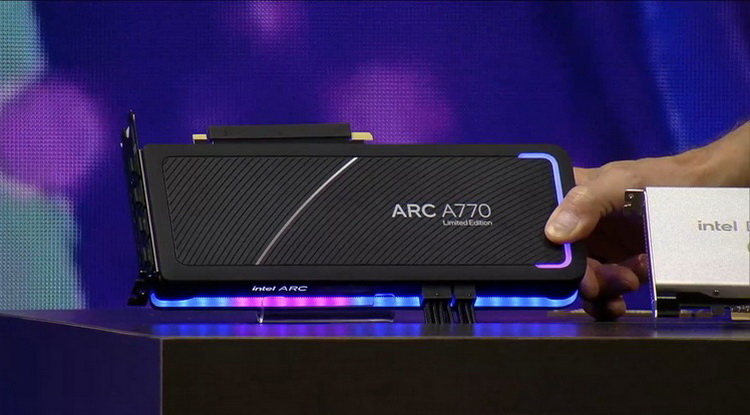 Intel has announced that it has solved an issue with GDDR6 memory slowdown in the reference Arc A770 16 GB Limited Edition graphics card.The manufacturer has released a new beta version of the driver, which fixes this bug in a software way, as well as solving a number of other problems.Image source: IntelIt was previously reported that some owners of the reference graphics cards Intel Arc 770 Limited Edition with 16 GB of memory have encountered discrepancies with the actual specifications of the gas pedal declared by the manufacturer.In particular, a number of owners noted that their graphics cards did not deliver the claimed GDDR6 memory speed of 17.5 Gbps per pin.Instead, the memory was running at 16Gbps.As a result, the memory bandwidth dropped from the claimed 560 GB/s to 512 GB/s.An Intel representative said via its Twitter page that the company has released a new beta version of the Arc Graphics Driver 31.0.101.3793.The new software solves the problem.\"For those who haven't seen it yet, we've released a new beta version of the driver that solves the problem.This was a bug on our end.We will now double check during the [driver] validation process to make sure we don't make similar mistakes in the future,\" Intel commented.Image source: CapcomThe new Arc Graphics Driver 31.0.101.3793 also fixes a number of issues with Arc graphics cards in games.For instance, Marvels' Spider-Man (DirectX 12) fixes an issue with textures when Ambient Occlusion is turned off or the HBAO+ setting is used.Also fixed texture corruption issue in Payday 2 when using DirectX 9 API.Resident Evil Village with DirectX 11 fixed a bug with distorted colors.In Age of Empire II & III: Definitive Edition the problem with display text in the game menu has been resolved, and in the application Topaz Video Enhance AI corrected performance problems with the video card Arc A380.In addition, the new driver provides support for graphics cards Arc games Call of Duty: Modern Warfare 2, Resident Evil Village Gold Edition and Victoria 3Pick up Arc Graphics Driver 31.0.101.3793 from the official Intel website (in Russia requires VPN).