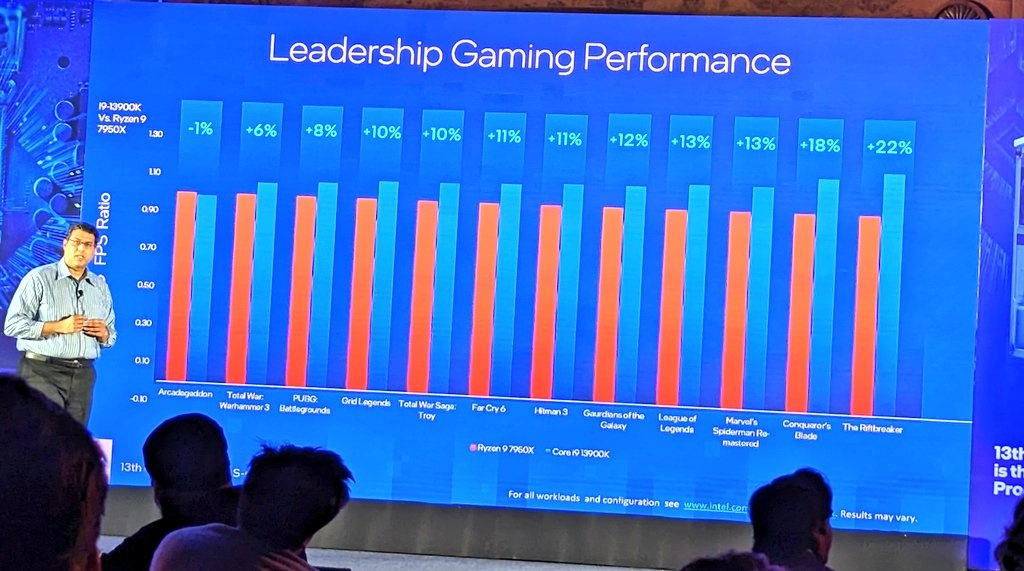 According to Intel itself, the new Raptor Lake series Core i9-13900K processor is on average 11% faster than the flagship AMD Ryzen 9 7950X in games.One of the VideoCardz reader shared photos from Intel presentation, anticipating the upcoming release of chips, where in particular the performance of new 24-core flagship processor was concerned.Image source: IntelThe slides showed Intel Core i9-13900K performance was compared directly with the direct competitor Ryzen 9 7950X.So, the new Intel chip was up to 22% faster in games, compared to AMD's solution.For example, such a difference can be expected in The Riftbreaker game.In this case, if we talk about the average difference in performance, it is about 11% in favor of the Intel chip. Intel Core i9-13900K vs AMD Ryzen 9 7950X in games.Image source: VideoCardz / IntelOn another slide shown, Intel showed the performance of the Core i9-13900K in various applications.PugetBench, Procyon, AutoCAD/AutoDesk were selected for the tests.According to Intel, in half of the tests between the two flagships there is parity in performance.In Photoshop, Intel's new product is slower by 3% than AMD's processor, while in AutoDesk/AutoCAD design programs, on the contrary, it is 4% and 16% faster. Intel Core i9-13900K vs AMD Ryzen 9 7950X in software.Source image: VideoCardz / IntelIt should be noted that the information on what conditions and with what PC components the above tests were conducted, is not yet available.Intel Core 13th generation processors will be available for sale on October 20.On the same day, the first independent reviews of these chips should appear.