Intel unveiled the 13th generation Core processors - up to 24 cores and up to 5.8 GHz 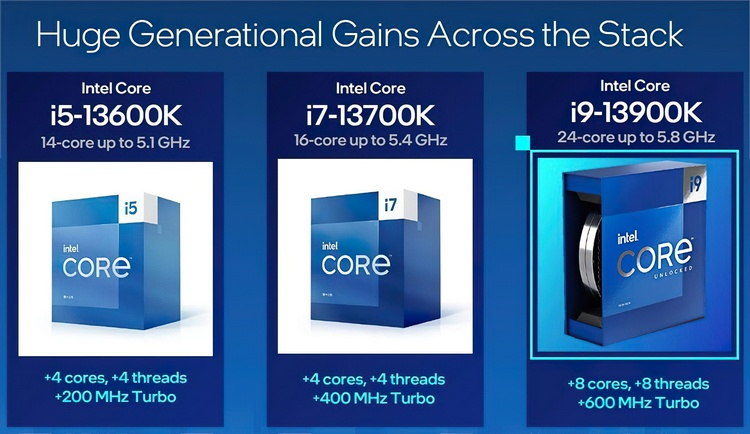 Intel unveiled the 13th generation Core desktop processors, also known as Raptor Lake, as part of its Innovation event.The new chips have a new architecture, more cores, and higher frequencies than their predecessors.At the same time, some models went up in price.Raptor Lake processors, like their predecessors, use hybrid architecture, combining a powerful P-core and energy-efficient E-core.The former are based on the new Raptor Cove architecture, and are distinguished by their increased L2 cache size.Alder Lake has 1.25 Mbytes of L2 cache per core, while the new products have 2 Mbytes of L2 cache per core.There are six models in total: the flagship Core i9-13900K and Core i9-13900KF, the average Core i7-13700K and Core i7-13700KF, as well as more affordable Core i5-13600K and Core i5-13600KF.All of them have an unlocked multiplier and belong to the more advanced and expensive Intel solutions.Recall that models with the suffix \"KF\" differ only in the absence of integrated graphics, but all other features they have identical to conventional processors.Announcement of more affordable Raptor Lake processors, deprived of overclocking capabilities, is expected later.Senior Core i9-13900K has 24 cores and support 32 threads, as well as a total of 32 MB of L2 cache and 36 MB of L3 cache.The eight cores here are high-performance Raptor Cove.Their base frequency is 3.0 GHz, all together they can automatically overclock to 5.4 GHz, and the maximum frequency provided by the Thermal Velocity Boost technology for 1-2 cores is 5.8 GHz.Another 16 cores of the flagship are energy-efficient Gracemont cores.Their base frequency is 2.2 GHz, and the maximum frequency is 4.3 GHz. The Core i7-13700K processor has eight P- and E-core each, which ultimately provides 24 threads.The previous flagship Core i9-12900K has the same configuration.The new Core i7 has a maximum clock speed of 5.4 GHz.Finally, the Core i5-13600K has six P cores and eight E cores, offering 20 threads.The clock speed of these processors can automatically go up to 5.1 GHz. As for performance, the slide above shows Intel comparing the Core i9-13900K to its predecessor Core i9-12900K in games.As you can see, in most projects, the newcomer is faster - in some places even by 20 percent or more. Intel also compares the Core i9-13900K with AMD's old flagship Ryzen 9 5950X.Intel's novelty in games delivers a higher average FPS by 6 to 58 percent, depending on the project.In addition, Intel cites a comparison with the best gaming processor of the last generation competitor, Ryzen 7 5800X3D.And in some games, the latter turns out to be faster or on par with the new Core i9-13900K! Intel also cites a comparison of the Core i9-13900K, Core i9-12900K and Ryzen 9 5950X in various professional applications from Adobe and Autodesk.New Intel product outperforms old flagship AMD by 16 to 69%.Along with the new CPUs, Intel has also introduced new 700-series chipsets, and motherboard manufacturers will release new solutions based on them.At the same Raptor Lake will be made in the same LGA 1700 chassis, as the current Alder Lake.New products will be compatible with motherboards based on the Intel 600-series system logic.The most affordable of the currently available Raptor Lake - Core i5-13600KF - priced at $294.By comparison, last year's Core i5-12600KF cost $264.At the same time, the flagship Core i9-13900K costs the same as its predecessor - $589.Sales of the Intel Core 13-generation processors will start on October 20.Also Intel has promised to release a limited series of processors next year, which can automatically overclock up to 6.0 GHz.We are probably talking about the Core i9-13900KS.