Ryzen 7000 reviews are out: much faster than its predecessors, but unlikely to overtake Intel Raptor Lake 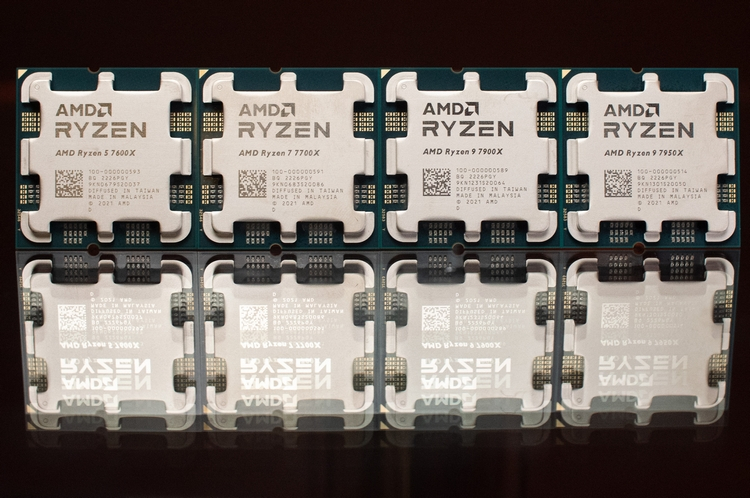 Tomorrow AMD will start selling Ryzen 7000-series processors, which not only bring the new Zen 4 architecture, but, more importantly, the new Socket AM5 platform.And today specialized resources have published reviews of new processors and here we give only the main results of the tests.In brief: the new products are much faster than their predecessors and can compete with Intel Alder Lake on an equal footing.But will this be enough to compete with Raptor Lake in the future? But first, let us remind you that AMD has now introduced four new generation processors: the six-core Ryzen 5 7600X, the eight-core Ryzen 7 7700X, the 12-core Ryzen 9 7900X and the 16-core Ryzen 9 7950X flagship.All of them use Zen 4 cores and are made according to the 5-nm process technology.The new platform brings a LGA socket called Socket AM5, as well as support for PCI Express 5.0 and DDR5 memory.All reviewers note a significant increase in both single-core and multi-core performance compared to Ryzen 5000-series processors.The processors in many (but not all) synthetic tests and applications Ryzen 9 7950X and Ryzen 9 7900X were faster than Core i9-12900K.And in some places the current Intel flagship was even behind the Ryzen 7 7700X. Synthetic test and applications 01.jpg See all pictures (12) 02.jpg 03.jpg 09.jpg 04.png 05.png 06.png 07.png 08.jpg 10.jpg 11.jpg 12.jpg See all pictures (12) On the other hand the junior Ryzen 5 7600X was ahead of Core i5-12600K without any surprises, but it did not make any bigger claims.But, to be fair, we should note that in some applications even the flagship Ryzen 9 7950X was weaker than the Core i5-12600K.But those were isolated cases.Games 01.jpg See all images (17) 02.jpg 03.jpg 04.jpg 05.jpg 06.jpg 07.jpg 08.jpg 09.jpg 10.jpg 11.jpg 12.jpg 13.jpg 14.jpg 15.jpg 16.jpg 17.jpg See all images (17) For gaming tests, you can see some differences between reviews.So, according to The FPS Review, in most games Ryzen 9 7900X and Ryzen 5 7600X prove to be weaker than Alder Lake chips including Core i5-12600K, and also inferior to the \"gaming king of AMD\" of the last generation - Ryzen 7 5800X3D.But the difference turns out to be quite insignificant.Similar results show the novelties in the hands of TechPowerUp. And Tom's Hardware reports that on average in games only overclocked to 5.1GHz Core i9-12900K chip is able to compete with the new AMD Ryzen 9 7950X and Ryzen 5 7600X.With standard settings AMD novelties are faster.Note also that not in all games the flagship is faster than other AMD novelties.As you can see from the table below, Ryzen 7 7700X is better than flagship in many gaming tests from ComputerBase. Even more interesting is power consumption of Ryzen 7000-series processors.We should point out that new Ryzen 9 CPU's TDP has been increased to 170W, compared to 105W of their predecessors.In turn, the new Ryzen 7 and 5 got TDP of just 105W. As a result, at full load Ryzen 9 7950X consumes 247W, and Ryzen 7 7600X - only 99W.In games, consumption is much lower on average.In all cases, the new Ryzen consumes much less than competitors - the same Core i9-12900K is able to \"eat\" up to 285 watts.But compared to its predecessors Ryzen 5000 series, consumption has increased. At the same time Ryzen 7000 turned out to be quite hot.At maximum load with a powerful air cooler Noctua NH-U14S Ryzen 5 7600X temperature was 88 °C, while Ryzen 7 7700X, Ryzen 9 7900X and Ryzen 9 7950X reached 94 °C.At the same time in games the figures were more acceptable: 70, 71, 76 and 76 °C, respectively. Here we should also add that automatic overclocking mechanisms, if the cooling system allows, are able to raise Ryzen 7000 frequency above standard values - for example, when cooling with a 280mm cooler I managed to achieve a peak frequency up to 5.85GHz.But on average gaming frequencies keep around 5.5GHz, which is much higher than its predecessors. In the end we would like to say that tomorrow Intel will unveil the Core 13th generation processors.According to rumors and leaks, they may be much faster than the current models of the 12th generation.So, the fact that AMD has caught up and slightly overtook (not everywhere) Intel Alder Lake processors may not be enough to successfully compete with the upcoming Raptor Lake.Whether this is true, we will find out quite soon.