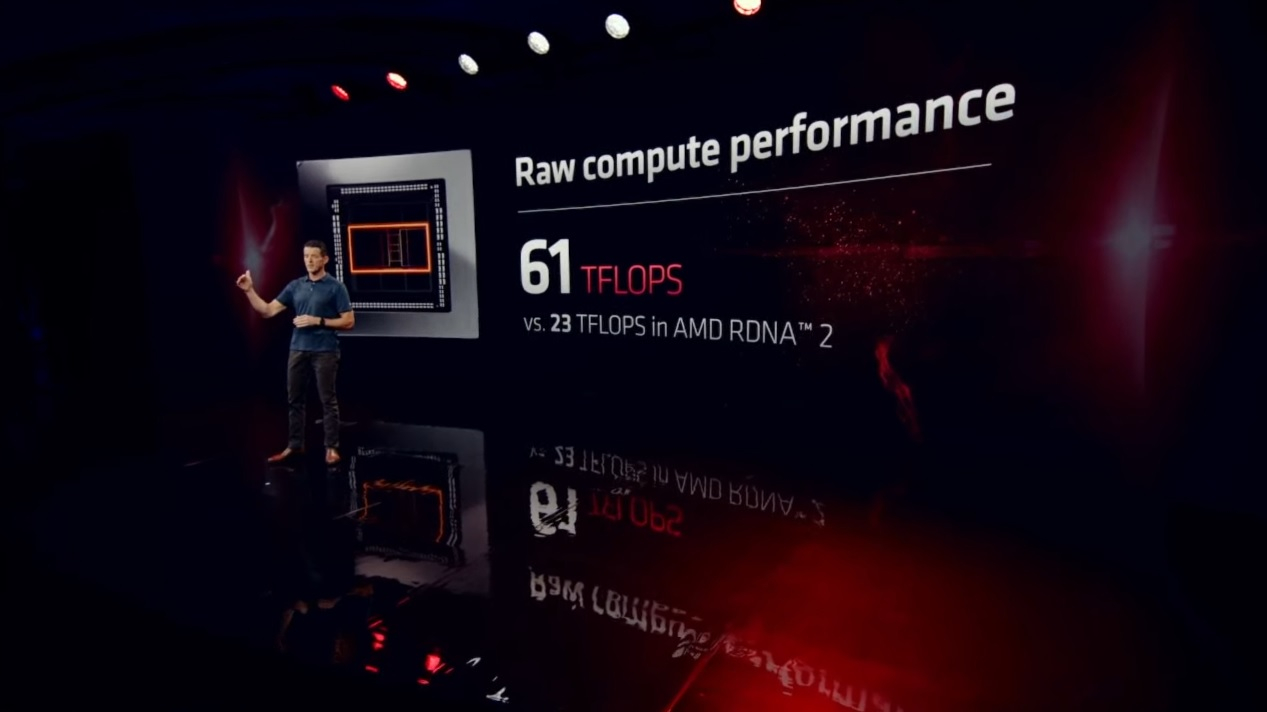 New products are based on flagship graphics processor with RDNA 3 architecture, which AMD calls the world's first GPU with a chiplet design - it consists of several crystals.

The big crystal in the center is made by 5-nm process technology and has an area of 300 mm2.It is called GCD (Graphics Compute Die) and includes all GPU computing blocks, as well as other necessary elements. Next to it are six small crystals with high speed memory Infinity Cache.

They are 6nm processors, have an area of 37mm2 each and are called MCD (Memory Cache Die).The bus bandwidth between GCD and MCD is 5.3 Tbytes/sec.

Note that Radeon RX 6000 had Infinity Cache memory on the same chip as GPU, but had 2.7 times less bandwidth. The new chips have a theoretical peak performance of 61 Tflops in single precision floating point operations (FP32), 2.7 times higher than the previous generation GPUs could offer (23 Tflops).

AMD notes that it optimized its computing block architecture for gaming, dramatically increasing performance.It also doubled the number of instructions executed per clock cycle, and increased the processing speed of ray tracing operations (by 50% for each processing unit) and artificial intelligence (by 2.7 times).

According to AMD, the new flagship Radeon RX 7900 XTX is 1.5-1.7 times faster in games than the Radeon RX 6950 XT.And when using ray tracing, which was not the strongest point of the last generation graphics cards, the performance increased by 1.5-1.6 times.

In general, AMD positions the new graphics card as a solution for 4K gameplay with high frame rate.And to achieve even higher frequency will help to scale FSR.Unfortunately, AMD did not compare its novelties with its competitors. Senior Radeon RX 7900 XTX has got graphics processor with 96 compute units (Compute Units, CU) with RDNA 3 architecture, which means there are 12,288 stream processors.

The chip runs at a clock speed of 2.3 GHz, which is the average frequency in games.Next to it is 96 MB of high-speed Infinity Cache memory, and the amount of GDDR6 video memory is 24 GB.It is connected via a 384-bit bus.

The graphics card power consumption is 355W. The subflagship Radeon RX 7900 XT has a graphics processor with 84 CU, which carry 10,752 stream processors.The average gaming frequency is claimed to be 2 GHz.The card has 80 MB of Infinity Cache memory, and the amount of GDDR6 video memory is 20 GB, and it is connected via a 320-bit bus.The consumption level of the card is 300 W.

The new AMD reference graphics cards have a cooling system with three fans and take up 2.5 expansion slots in height.

For additional power each has two 8-pin connectors.AMD separately pointed out that \"its new graphics cards won't need new chassis or new power supplies.\" This was obviously a kick in the teeth for NVIDIA, whose flagship GeForce RTX 4090 turned out to be huge, and also uses new 12+4 pin power connector. Also AMD emphasized on the new graphics cards support of the latest DisplayPort 2.1 interface.

It provides the ability to output images in 8K resolution at up to 165 Hz or in 4K resolution at 480 Hz.The problem so far is that there are no monitors with this interface and these characteristics on the market.Here we should also note the support of hardware acceleration when working with AV1 codec.