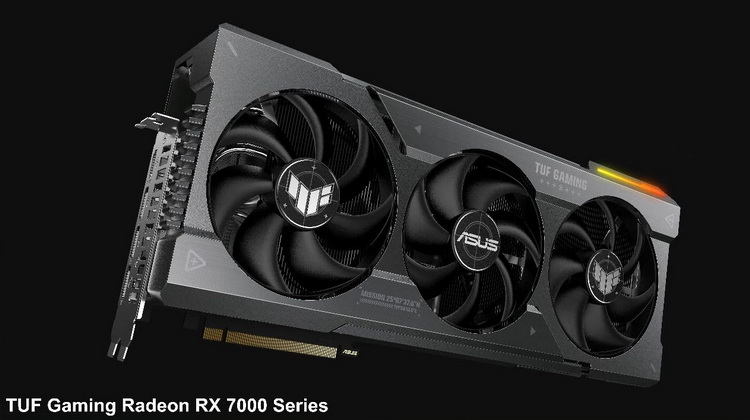 ASUS announced graphics cards Radeon RX 7900 XTX and RX 7900 XT in their own version TUF Gaming.The company is not ready to share the specs of new products, but the manufacturer has revealed some details about them.Image source: ASUSBoth gas pedals will get a massive cooling system, equipped with three fans.The thickness of video cards will be three expansion slots.Both will get a dual BIOS system with quiet and performance modes. Unlike the reference versions Radeon RX 7900 XTX and RX 7900 XT, variants from ASUS have got not two, but three 8-pin connectors of additional power.In addition, new items will be the first gaming cards from ASUS, which will support DisplayPort 2.1 interface. Graphics card Radeon RX 7900 XTX has a graphics processor with 12,288 stream processors, the reference gaming frequency is 2.3 GHz.The card has 24 GB of GDDR6 memory with 384-bit bus support.The Radeon RX 7900 XT model is based on a GPU with 10,752 cores and has a reference frequency of 2 GHz.This gas pedal has received 20 GB of memory GDDR6 with support for 320-bit bus.ASUS has not reported with what frequencies will run GPUs in its video cards.Also unknown is the price of announced Radeon RX 7900 XTX and RX 7900 XT TUF Gaming models.However, most of the prices for these graphics cards are close to the recommended ones, which are $999 and $899 respectively.The company only confirmed that the novelties will be on sale in December this year.