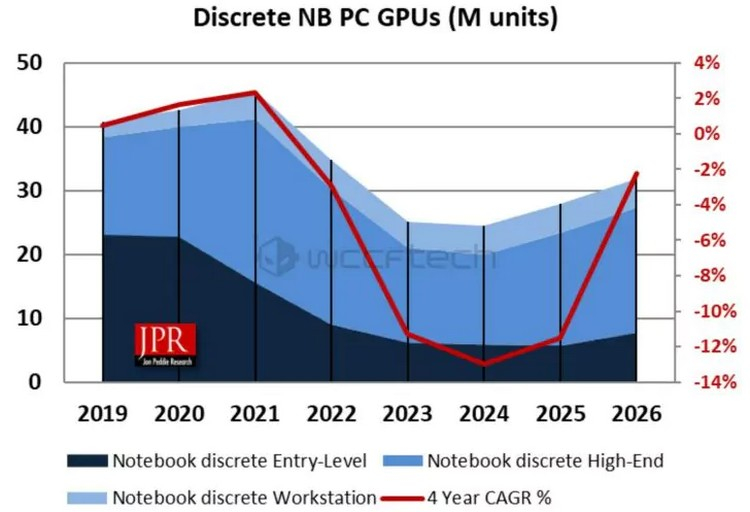 The other day, thanks to a report from Jon Peddie Research (JPR), we learned that shipments of all types of graphics processors collapsed by 25% in the third quarter.Now, thanks to the same analysts, we know how the discrete graphics card market changed over the same period.In short - it fell even more, and AMD gave NVIDIA a serious share of this market.Image source: WCCFTechThe discrete graphics market sagged very strongly.In the third quarter of 2022, the supply of graphics cards was only 14 million units, a drop of 41.6% compared to the same period last year, when the supply was 24 million graphics cards.Even a quarter earlier the situation on the market was much better - in the second quarter of 2022 was delivered 19 million discrete graphics cards.Shipments of mobile and desktop graphics cards were divided equally - in each segment was delivered 7 million cards.However, desktop cards previously dominated the market, with 10 million desktop boards shipped in the quarter versus 8.6 million mobile boards, and 13 million desktop boards versus 11.6 million mobile discrete graphics cards shipped in the third quarter of 2021.NVIDIA saw its share of the discrete graphics market grow to 88% in the third quarter, up 8 percentage points from the quarter before.As a result, AMD had only 8 percent of the discrete graphics market, down from 15 percent in the second quarter.And the remaining 4 percent was taken by Intel.In the desktop segment, AMD is doing slightly better - here it took 10 percent.The remaining nine tenths of the market were divided between NVIDIA with 86% share and Intel with the same 4%.As for the mobile segment, NVIDIA's dominance is even stronger - the company owns 90% of the market, while Intel and AMD equally shared the remaining 10%.Overall supply of graphics processors, both discrete and embedded, both mobile and desktop, is rapidly decreasing since the second quarter of 2021.Then a sharp decline occurred in the third quarter, then in 2022, the market was relatively stable until the first quarter of this year, but after that again began to actively decline.This is likely due to the economic and geopolitical instability in the world.Analysts expect that next year, sales of graphics processors will fall even more.In 2024 the market will be steadily low, and the recovery will begin only in 2025.But the growth will not be too significant.These are tough times for the PC market: demand for PCs soared during the pandemic, and now the need for them is severely diminished.The GPU market has been heavily influenced by mining, which has driven high discrete graphics sales.Now the market is flooded with cheap used video cards from miners, and there are a lot of new gas pedals in stores now, but some are asking too much.