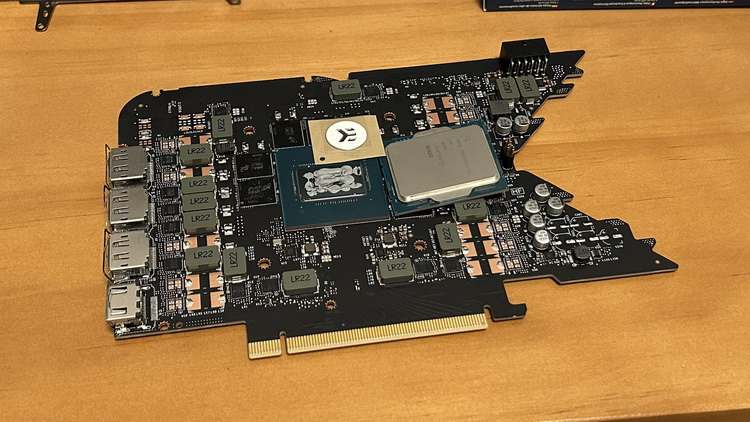 Photos of the circuit board of the reference graphics card GeForce RTX 4080 16GB Founders Edition have been published on the web.They show a large-scale AD103 GPU on the Ada Lovelace architecture.Twitter user @KittyYYuko shared the pictures.Image source: Twitter / @KittyYYuko In an effort to hide details that could tip off NVIDIA as the informant, @KittyYYuko covered some parts of the PCB with an Intel processor and an EK sticker.Unfortunately, the presence of these items on the PCB makes it impossible to estimate, the exact number of power phases used by the reference version of the GeForce RTX 4080.However, we can note that some of the slots for the elements of the VRM subsystem are empty at all.This may hint that NVIDIA in the future may release a more powerful solution, for example, in the form of GeForce RTX 4080 Ti, which will then undoubtedly have a more efficient power subsystem.Officially, NVIDIA has not said anything about such plans yet. On the photo of the PCB you can also note the presence of the latter 12+4-pin power connector 12VHPWR.Apparently, this standard will be used in all senior models of GeForce RTX 40-series gas pedals. Recall that at the core of the GeForce RTX 4080 16GB uses a graphics processor with 9728 CUDA cores.The card has 16 GB of GDDR6X memory.The photo shows that the gas pedal is equipped with eight Micron memory modules of 2 GB each.The memory is connected to the GPU via a 256-bit bus.The informant also said that the card scored about 14,100 graphics performance points in the 3DMark Time Spy Extreme synthetic test, which is also confirmed by earlier leaks from other insiders.Screenshots of the latest such leak can be seen below. Source image: Twitter / MEGAsizeGPUThe GeForce RTX 4080 16GB sales launch is scheduled for November 16.The recommended price of the gas pedal in the Founders Edition reference version is $1199.