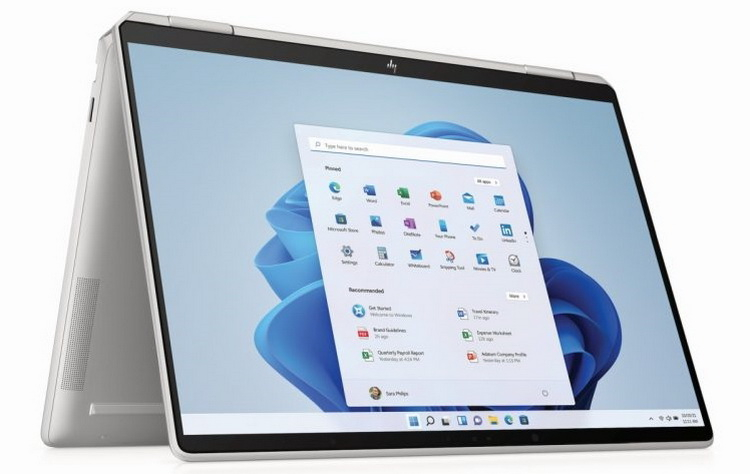 HP has upgraded the 13.5- and 16-inch HP Spectre x360 laptop models with Alder Lake-P and Alder Lake-H processors.The devices offer up to 32GB of RAM and solid-state drives up to 2TB.Image source: HPThe updated Spectre models have an attractive design, as well as offering nice bonuses like four speakers and an OLED display as an option, as befits a premium notebook series.However, against the background of the predecessor 13.5-inch updated model stands out the new screen aspect ratio 3:2.The company offers for this model to choose from two display options.This can be an IPS matrix with a resolution of 1920 × 1280 pixels, or a touch OLED display with a resolution of 3000 × 2000 pixels.In both cases, the screen takes up 90.1 percent of the device's usable front panel area.HP has equipped the 13.5-inch Spectre x360 with an infrared 5-megapixel camera that improves image quality in low light, allowing the caller to see the user better during a video call.In addition, the camera supports auto-framing (keeps the user in the frame when they move), automatic backlight adjustment, image noise reduction with AI algorithms, and a dynamic audio enhancement function.The camera is covered by a curtain for safety.Prices for the updated 13.5-inch HP Spectre x360 start at $1250 for the version powered by a 10-core Intel Core i5-1235U up to 4.4GHz, equipped with 8GB of LPDDR4X-4266 RAM and a 512GB PCIe 4.0 NVMe solid-state drive.There's also a choice of a 10-core Core i7-1255U up to 4.7GHz, up to 32GB of RAM and 2TB of storage.No discrete graphics card is provided.RAM laptop soldered directly on the motherboard.So if you choose the configuration with 8 GB of RAM you should think about it carefully or you may add money for choosing the version with 16 or 32 GB RAM.External interfaces are presented by two Thunderbolt 4.0 ports (USB Type-C), one USB 3.2 Gen 2 Type-A, 3.5mm audio combo jack and microSD card reader.The Spectre laptops come with the HP Tilt Pen, an electronic pen that supports multiple degrees of pressure via Microsoft Pen Protocol 2.0.Wi-Fi 6E and Bluetooth 5.2 wireless support, a fingerprint scanner and a 65W USB Type-C charger are also claimed.The laptop's 66-watt-hour battery charges from zero to 50 percent in 45 minutes.The updated 13.5-inch HP Spectre x360 is assembled in a metal case made of recycled aluminum.The keyboard keycaps on the device are made of recycled plastic.The notebook measures 297.94 × 220.47 × 17.02 mm and weighs 1.37 kg.The larger 16-inch updated HP Spectre x360 offers a choice of Alder Lake-H processors, up to the 14-core Intel Core i7-12700H with up to 4.7 GHz.An Intel Arc A370M discrete graphics gas pedal is optional here.The graphics card has eight Xe cores and eight ray tracing blocks, and has received 4GB of GDDR6 memory with a 64-bit bus.A choice of IPS panel with a resolution of 3072 × 1920 pixels and an OLED display with a resolution of 3840 × 2400 dots is available.The aspect ratio of the screens is 16:10.The older version of the HP Spectre x360 is equipped with an 83-watt-hour battery.The dimensions of the 16-inch version of the laptop are 357.89 × 245.36 × 19.81 mm.The weight is 2.02 kg.The novelty is already available for sale at a price of $ 1,650 in the U.S.