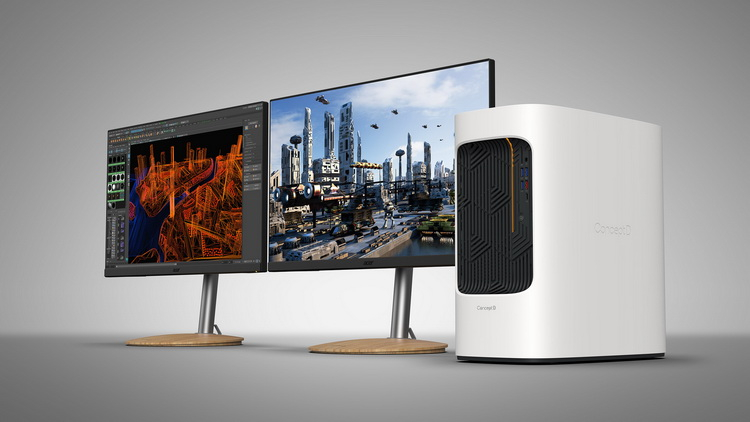 Acer has announced the ConceptD 100 and ConceptD 500 compact desktops.Despite its modest size, the new additions feature high-performance Intel Alder Lake processors as well as professional and gaming models of NVIDIA graphics gas pedals.Image source: AcerThe size of the Acer ConceptD 100 desktop is 137.4 × 373 × 359 mm.Despite its compact size, the newcomer can offer features available to full-size systems.Specifically, Acer is ready to equip the ConceptD 100 with an Intel Core i7 generation Alder Lake processor, up to 128 GB of dual channel DDR4-3200 RAM, a PCIe 4.0 SSD, and a hard drive up to 7200 RPM. Acer ConceptD 100There is also a choice between NVIDIA T400 and NVIDIA T1000 professional graphics cards.Both cards are based on the Turing architecture and use the TU117 processors, such as those found in GeForce GTX 1650 gaming cards.The older version of the NVIDIA T1000 uses a chip with the same number of shader, texture and rasterization blocks as the GeForce GTX 1650.The NVIDIA T400 uses a simplified version of the TU117 chip with fewer execution blocks. Acer ConceptD 100Compact desktop Acer ConceptD 100 offers support for Wi-Fi 6 or Wi-Fi 6E, 2.5 Gigabit LAN, and uses Windows 11 Pro as the operating system.The new product is scheduled to go on sale in Europe, the Middle East and Africa in September.The cost of the computer will start at 999 euros. Acer ConceptD 500The ConceptD 500, measuring 200 × 389 × 393.6, will be able to offer even more performance stuffing.Acer claims the ability to install an Alder Lake processor all the way up to the Core i9 model.The system will also support up to 128GB of DDR4-3200 RAM, a hard drive up to 2TB and a 1TB PCIe 4.0 NVMe SSD. Acer ConceptD 500The ConceptD 500 offers the more powerful NVIDIA RTX A4000, GeForce RTX 3060 or GeForce RTX 3070 graphics gas pedals.It also claims support for Wi-Fi 6 or Wi-Fi 6E and a wired 2.5-gigabit network adapter.The price of the Acer ConceptD 500 will start at €1,199.In Africa, Europe and the Middle East, the novelty will also appear in September this year.In China, desktop sales will not start before the fourth quarter.Prices there will start at about $1,800.