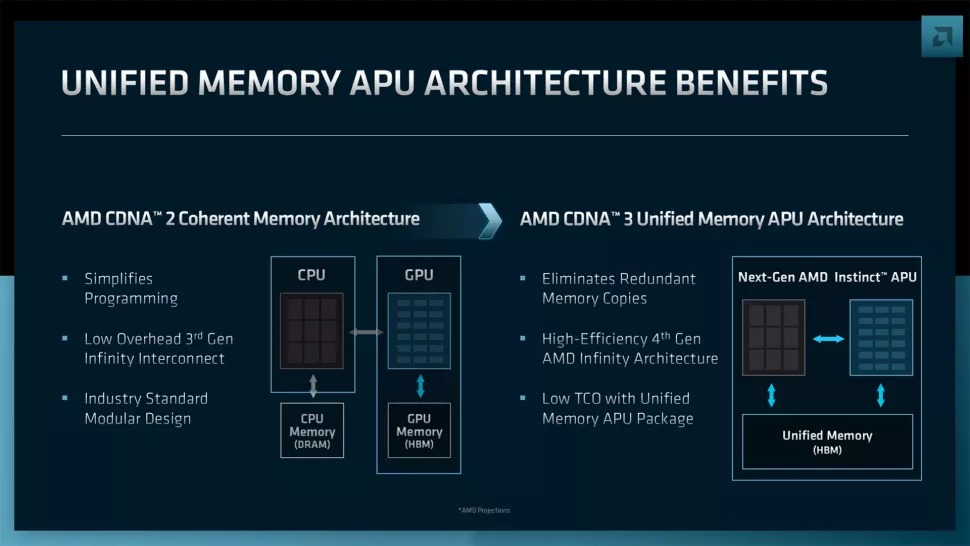 AMD has unveiled the latest all-in-one solution for data center servers - the APU MI300 combines CPU and GPU modules in a single product and uses the latest CDNA 3 graphics architecture to boost performance per watt several times over.AMD claims that the new model is five times more productive than solutions based on CDNA 2 architecture.Image source: AMDThe new AMD solution uses cores similar to those used by NVIDIA tensor variants, unlike consumer graphics processors.This allows about four times the performance per watt, and architectural improvements increase this figure to 5X.However, real-world performance in the field remains to be seen.In addition to performance and power efficiency gains, CDNA 3 includes the fourth-generation Infinity Fabric and the next-generation Infinity Cache.As expected, CDNA 3 will use a 5nm processor, presumably TSMC N5 or N5P.The CDNA 3 architecture also helps move from the coherent, separate cache for CPU and GPU used with CDNA 2 to a unified architecture.This is a critical improvement because data centers use a significant amount of energy to transfer data within a single system, and getting rid of the need for redundant copies helps boost overall performance.Image source: AMDAMD Instinct MI300 combines both GPUs and CPUs in one package.The company calls it the first data center APU.It is noteworthy that the company did not use the term APU with Ryzen series chipsets equipped with integrated graphics processors, and it seems that it intends to return to the use of the term, but with the CPU cores on the architecture of Zen 4 and GPU with CDNA 3.MI300 is an advanced solution that combines in one package CPU, GPU, cache and HMB-memory.Apparently, we're talking about four CPU/GPU chips combined with HBM memory.The MI300 is likely to be widely used in supercomputers like El Capitan.Unlike the Frontier supercomputer using Zen 3 EPYC Trento processors, in which each 64-core processor is linked to four GPUs, the El Capitan solution could consist exclusively of MI300 APUs.Image source: AMDThe MI300 will result in an eight-fold increase in system learning performance compared to the MI250X, according to AMD.The latter contains a pair of graphics processing crystals (GCDs) in a single package, while the MI300 will likely have three graphics crystals on CDNA 3 as well as a single CPU crystal on the Zen 4 architecture.This combination by itself will presumably increase the graphics potential by 50%, even without taking into account architectural improvements.