AMD and NVIDIA today introduced new graphics solutions for high-performance computing related to Artificial Intelligence algorithms. And if in the case of NVIDIA we are talking about updating the existing A100 gas pedal, which has increased the amount of memory and its bandwidth, AMD introduced a completely new solution in the form of Instinct MI100 gas pedal based on the new CDNA architecture. 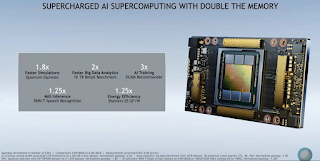 The new version of the NVIDIA A100 graphics gas pedal, like the original one, is based on Ampere architecture. What distinguishes this new version from the previous one is the increased memory capacity of HBM2e from 40 to 80 Gbytes, as well as the increased bandwidth from 1.555 to 2 Tbytes per second. Other features of both versions of the gas pedal are the same. 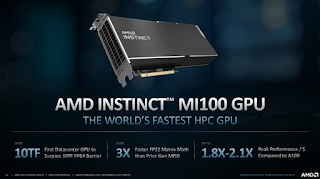 At the moment, the new version of A100 is presented only in the form factor SXM3, so it is intended for use in its own computing platform NVIDIA DGX, as well as in HGX-platforms from partners. The latter will present early next year special kits for integrating the new A100 version into their existing solutions, including options that support the installation of 4 and 8 gas pedals. 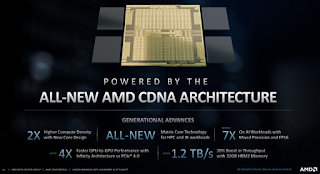 The novelty from NVIDA will have to compete with AMD's brand new solution - Instinct MI100 computing graphic gas pedal based on 7nm CDNA architecture. Unlike the RDNA architecture, which is used in gaming and professional solutions aimed at working with rendering, the main profile of CDNA is high-performance computing and work with artificial intelligence algorithms. 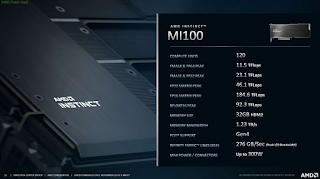 AMD Instinct MI100 is designed to work with PCIe 4.0 x16 (64 Gbytes/s) interface. The Instinct MI100 GPU uses 120 executive blocks (Compute Units), which contain new blocks for matrix operations, used in tasks to accelerate calculations related to AI algorithms. According to AMD, the new blocks do not work at the expense of classical computing. For example, the peak performance in FP64 applications is 11.5 Tflops, while for FP32 it is exactly twice that of 23 Tflops, which is higher than the performance declared for NVIDIA A100. 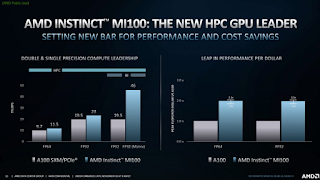 However, in the same bfloat16 calculations Instinct MI100 from AMD loses to the competitor - 92.3 Tflops vs. 312 Tflops. In fairness it should be noted that this is a comparison with the SXM-version of the NVIDIA A100 gas pedal. The NVIDIA PCIe-version of the gas pedal, due to the lower power consumption in real-world tasks, can be somewhat slower. In turn, the Instinct MI100 is currently only available in the form factor of a full-size 300W PCIe card.

According to AMD, its new solution is 1.8-2.1 times more attractive in terms of performance per dollar ratio than NVIDIA with its A100.

The first systems to receive the new computing graphics gas pedals AMD Instinct MI100 will be Dell PowerEdge R7525, Gigabyte G482-Z54, HPE Apollo 6500 Gen10 Plus and Supermicro AS-4124GS-TNR. It is noted that some of the company's partners have already received new gas pedals and systems based on them for performance evaluation and software adaptation.

For more details about the announcements of NVIDIA A100 and AMD Instinct MI100 computing graphics gas pedals, please visit our subsidiary ServerNews resource. 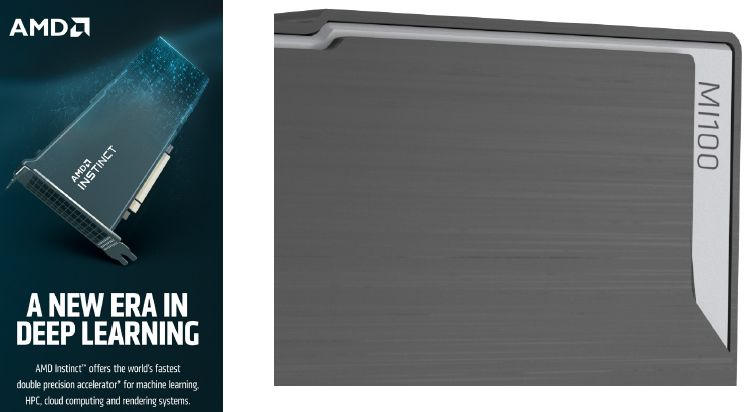 Back in late July, AMD's presentation promised to bypass the NVIDIA A100 Single Precision Computing Accelerator with its own solution called Instinct MI100 on a new CDNA architecture chip. As it became known today, products with CDNA architecture will be unveiled by the company on November 16.

This information came to us quite casually while studying the October edition of AMD corporate identity book, which anyone can get in the service section of the company's website for partners. The book was updated to reflect the new style of the Radeon logo, which was unified with the font used to identify Ryzen processors, and the information about Instinct gas pedals was not particularly striking.

Source of the image: AMD

Still, AMD found it necessary to warn a casual reader that information about the Instinct family of computing gas pedals is subject to a nondisclosure subscription until November 16 this year. Which is typical, following the example of NVIDIA, the company has excluded from the official name of the gas pedals association with gaming graphics cards & ; « Radeon » in this sense became atavism.

In addition to the flagship Instinct MI100, the family will feature Instinct V640 and Instinct V620 gas pedals. Most likely, all three models will be able to be combined into computational clusters with similar ones. Senior Instinct MI100 will allow to combine from four to eight gas pedals in one system. There is even an image of a fragment of the cooling system casing of this product and its advertising banner.

AMD explains that Instinct products can be called both processors and GPUs (graphics processors), but it is not allowed to write their names in capital letters. In the future, the CDNA architecture will develop independently, regardless of RDNA game graphics.