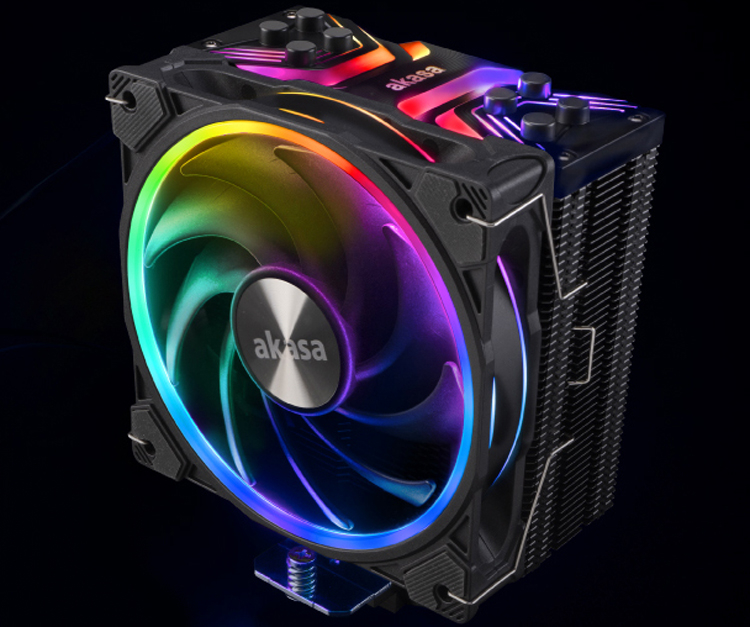 Akasa has expanded its range of universal CPU coolers with the announcement of the Soho H4 Plus.The unit has a classic tower design.Image source: AkasaThrough the aluminum heatsink pass four U-shaped copper heat pipes.The fan has a 120mm diameter hydrodynamic bearing impeller with nine blades.The fan speed is controlled by pulse-width modulation (PWM) from 500 to 2000 rpm.Maximum airflow is 90 cubic meters per hour and static pressure is 1.75 mm water column.Noise level does not exceed 31.8 dBA.Service life - up to 40 thousand hours.The cooler is equipped with an addressable backlight with a palette of 16.8 million shades.Effects can be adjusted and synchronized by Gigabyte RGB Fusion, MSI Mystic Light, ASUS Aura, ASRock Polychrome or Razer Chroma RGB technology.Novelty is compatible with AMD AM4 and Intel LGA 1700, LGA 115x, LGA 1200, LGA 20x processors.So, the solution can be used with twelfth generation Intel Core chips (Alder Lake).The size is 153.6 × 120 × 92 mm, the weight is about 704 g.The price is about 52 euros. 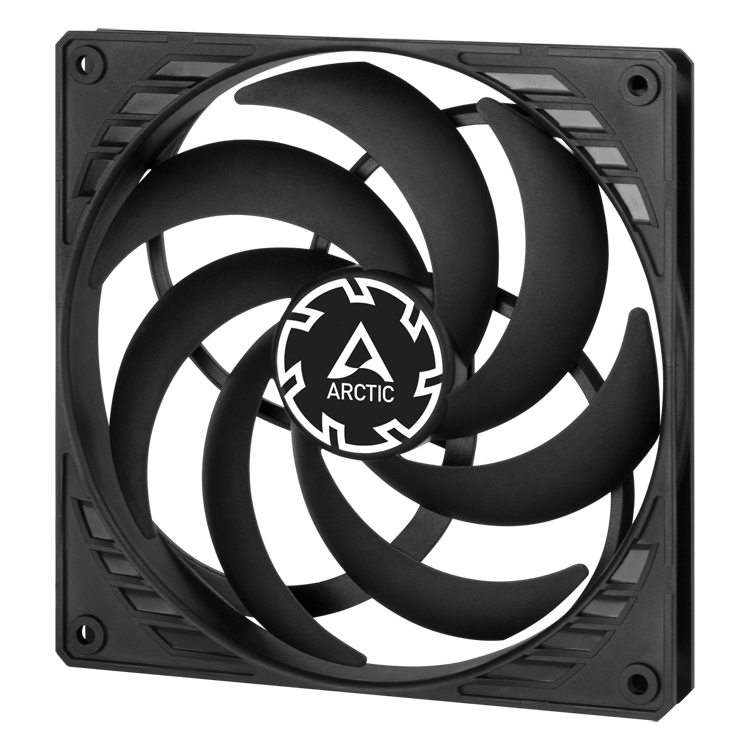 Arctic announced P14 Slim PWM PST case fan, designed for use in systems with limited internal space - compact desktops, home media centers, etc.Image source: ArcticThe novelty has 140mm diameter and is 16mm thick against 25-27mm for standard products in this format.It is based on a rugged hydrodynamic bearing and the impeller has seven blades.The rotation speed is regulated by pulse-width modulation (PWM) in the range from 150 to 1800 revolutions per minute.In 0 DB Mode, the fan can be stopped completely, producing up to 88.35 cubic meters of air flow per hour.The maximum static pressure is 1.35 mm water column.Overall dimensions - 140 × 140 × 16 mm, weight - 109 g.Fan Arctic P14 Slim PWM PST is already available for order for an approximate price of 13 euros.The manufacturer's warranty is six years. 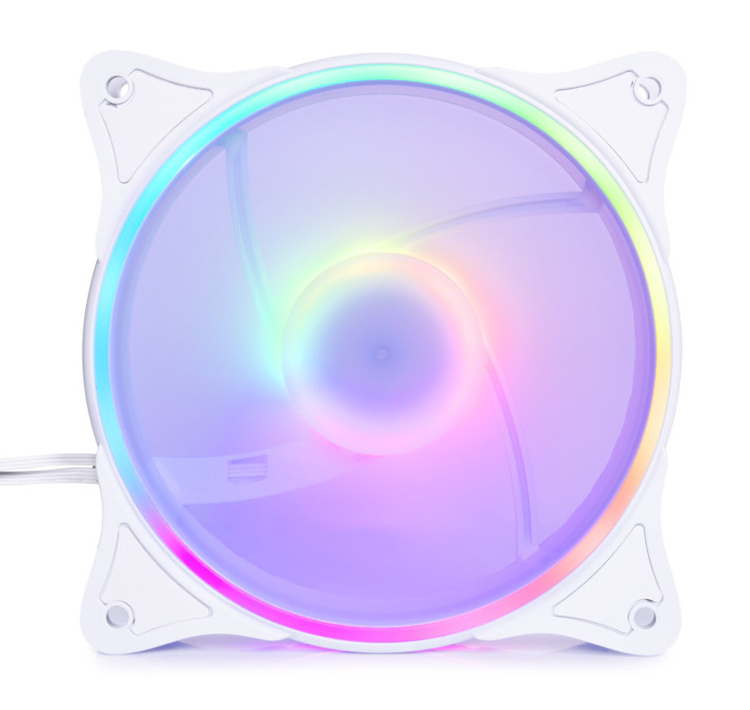 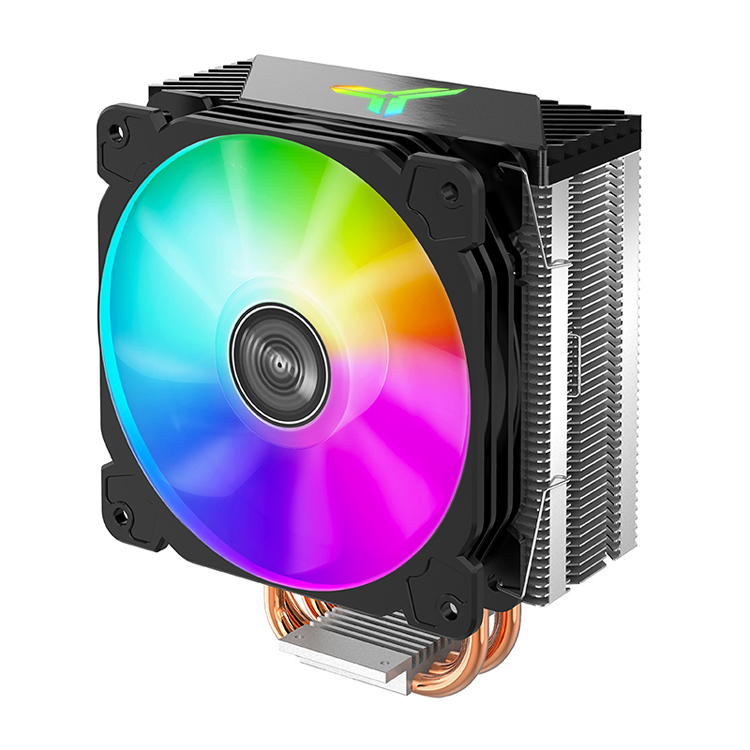 The Jonsbo range includes the CR-1000 ARGB universal CPU cooler with a classic tower design.The novelty, as reflected in the name, is endowed with a multicolor addressable backlight.Image source: JonsboThe design includes an aluminum heat sink, which is pierced by four copper U-shaped heat pipes.They make direct contact with the CPU cover, which helps raise cooling efficiency.A 120mm fan with PWM control ranging from 700rpm to 1800rpm blows air at 120mm fan speed.Maximum airflow is 114 cubic meters per hour with a noise level not exceeding 37.2 dBA.The cooler has dimensions of 128 × 76 × 158 mm and weighs 610 g.It is said to be compatible with Intel LGA115x/1200/1700 and AMD AM4 processors.There is no information about Jonsbo CR-1000 ARGB approximate price at the moment. 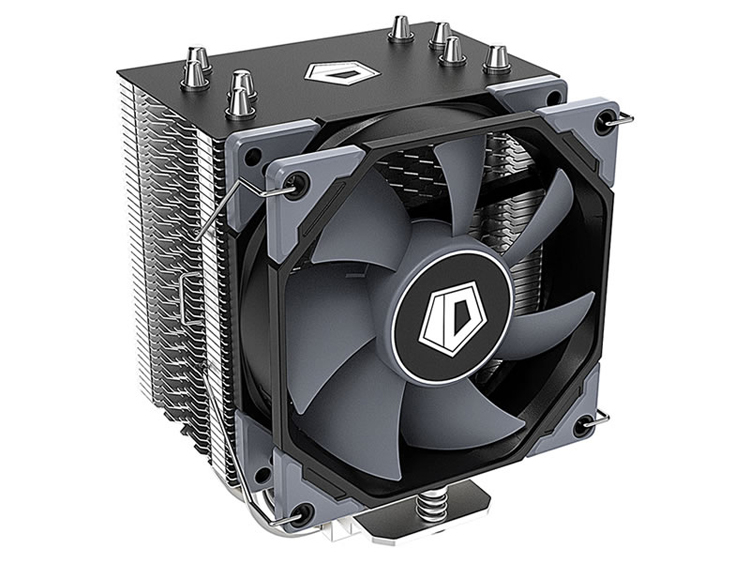 The Japanese company Ainex, well-known developer of air cooling systems, has announced the SE-914-XT-BASIC-V2 CPU cooler with a classic tower design.Image source: AinexThe new product is equipped with an aluminum radiator and four copper heat pipes with 6mm diameter.They have direct contact with the processor cover, which allows you to raise the efficiency of heat dissipation.Blowing the radiator engaged fan 92 mm in diameter with seven-blade impeller.Its speed is controlled by pulse-width modulation (PWM) ranging from 600 to 2200 rpm.The cooler is compatible with AMD AM4 processors and Intel chips of LGA 2011/2011-V3/2066/1150/1151/1155/1156/1200/1700 design.The maximum allowable value of heat dissipation (TDP index) is 150 W.The product has a height of 126 mm.This makes it suitable for relatively compact desktop computers. 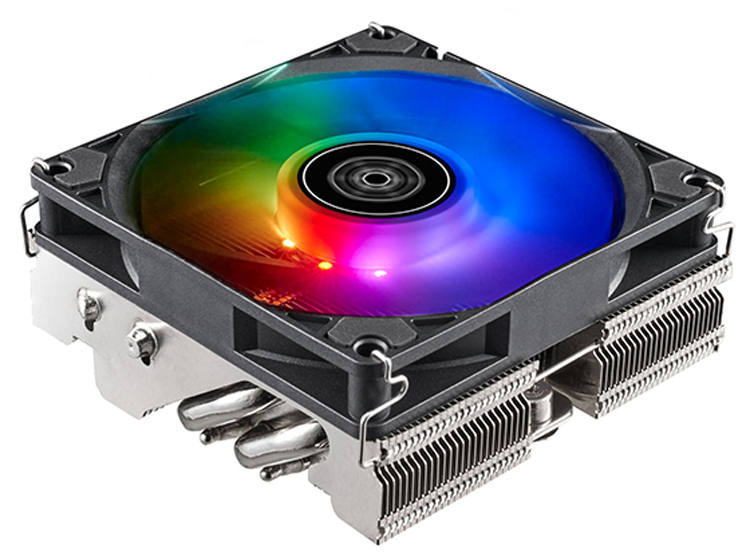 SilverStone announced the Hydrogon H90 ARGB, a CPU cooler suitable for compact desktops and systems where space is limited inside the case.Image source: SilverStoneNew with top flow design.Four 6 mm copper heat pipes pass through the aluminum radiator.The total height of the product is only 48 mm.For blowing is responsible fan diameter of 92 mm.The rotation speed of the eleven blade fan is controlled by pulse width modulation (PWM) from 500 to 2600 rpm.Up to 78 cubic meters of air flow per hour are generated with a noise level not exceeding 34.6 dBA.Maximum static pressure - 2.29 mm of water column.The cooler is equipped with a multicolor addressable backlight.Sync effects can be synchronized with other computer components via compatible motherboard with ASUS Aura Sync, Gigabyte RGB Fusion, ASRock PolyChrome Sync and MSI Mystic Light Sync technology.Novelty is compatible with AMD AM4 and Intel LGA 2066/2011/1700/1200/115x processors.The overall dimensions are 95 × 48 × 95 mm. 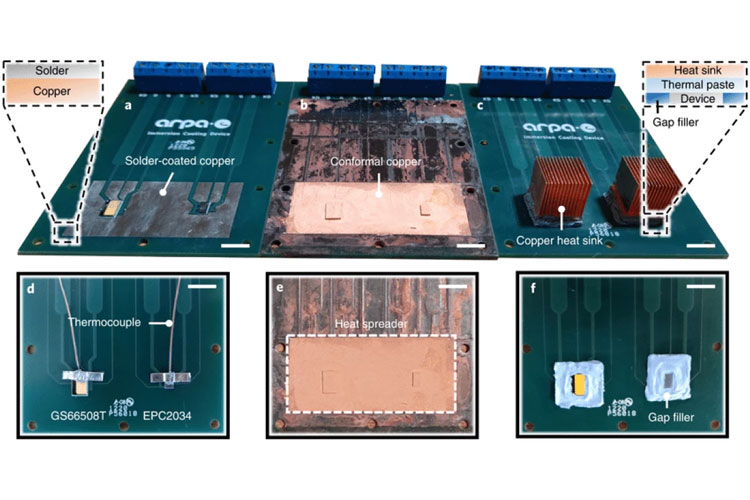 Scientists continue to search for the most efficient way to remove heat from electronic devices.In a new study, a team from the University of Illinois and University of California, Berkeley, has shown a new cooling method that's 740 percent more effective than using heat sinks, thermal pastes and other traditional heat dissipation methods.Conformal copper-coated circuit board in the center.One of the bottlenecks of heat dissipation was and still is the area where the heat sink contacts the surface of the chips or other electronic device surfaces that need to be cooled.Also, the lower part of the heat sink gets the warmest, which makes effective cooling of adjacent areas of the same PCB problematic.The scientists, whose study appeared in the prestigious journal Nature Electronics, solved both of these problems with one technique.The printed circuit board and electronic components on it were coated with a layer of poly-para-xylene (Parylene C).This is a dielectric material and a common coating for PCBs to protect against oxidation and other environmental influences.The second step was to apply a coating of copper over the dielectric.The copper was applied as the protective coating in a continuous layer.Thanks to the Parylene C layer, it could not short-circuit the electronic circuits and at the same time lay on all exposed surfaces on all sides, becoming something like a continuous heat sink and actually becoming one with the electronic components.First the copper was deposited from the vapor phase in a vacuum, which allowed a 20 nm thickness, and then 50 nm was added by electrolysis.Electrolysis allowed the copper to be deposited on all unaffected areas, allowing all surfaces on the board and chips to be coated in this manner.Image source: University of IllinoisExperiments have shown that such copper conformal coating handles the heat removal from electronic boards as well as traditional methods in the complete absence of heavy heat sinks.What's more, the coated boards can be installed in larger quantities in a limited enclosure volume and that will only improve heat dissipation.On the test bench, scientists showed that the heat dissipation efficiency could be improved by up to 8.4 times.The study confirmed that this conformal copper coating is suitable for air and water cooling systems, although further tests are needed to see how robust the solution will be in boiling water, boiling dielectric fluids, high voltage applications and in circuits more complex than the simple test stands used in the study. 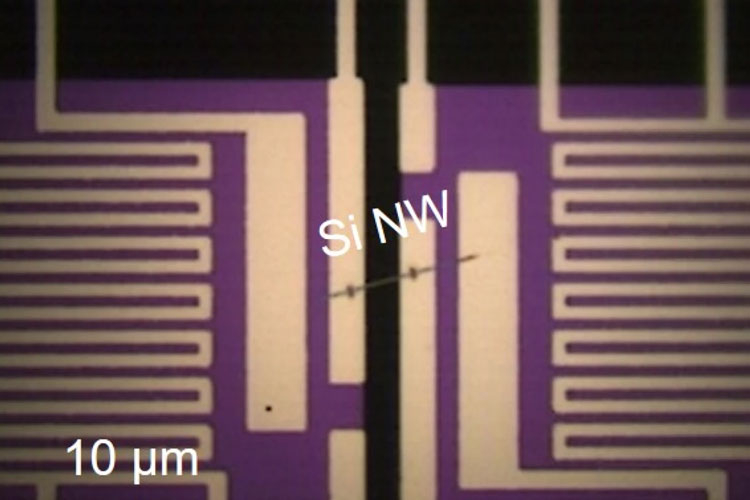 Scientists have found a way to improve the cooling of processors and other chips by 150%, but it's not easy

Many people know the problem of cooling processors and other chips well.As the technological norms for manufacturing decrease, the problem becomes more acute as the energy density increases dramatically.Scientists have found that silicon can only increase the efficiency of heat dissipation by increasing its isotopic purity.Experiments have shown that the \"natural\" heat sink of chips can be increased up to 2.5 times.Image source: Junqiao Wu/Berkeley LabAs you know, all silicon in our nature consists of three stable forms of isotopes: about 92% is silicon-28 (28Si), 5% - silicon-29 (29Si) and 3% - silicon-30 (30Si).No one purifies silicon to make chips, although early studies showed that the silicon-28 isotope has the best thermal conductivity of all silicon isotopes, and impurities 29Si and 30Si impurities interrupt heat fluxes.It was believed that the gain barely exceeds 10% with significantly increasing costs of purification.Scientists from the Lawrence Berkeley National Laboratory.Lawrence Berkeley set up an experiment in which they tried to assess the degree of influence of silicon purification on the heat sink.They connected two thermocouples with nanowires 90 nm wide and measured the heat transfer.It turned out that pure silicon-28 improves heat transfer from the heating element to the other by 150%, not 10%, as previously thought.On closer examination it turned out that the surface of the nanowire was covered with silicon dioxide, which prevented parasitic heat dissipation across the surface of the wire, and the heat flow was concentrated in its center.Scientists do not give any recipes for the organization of the heat sink from the chips in a new way.But they showed the possibility of multiplying the efficiency of heat removal from the crystals, which will be worth the candle - the cost of producing isotope-pure silicon for future chips. 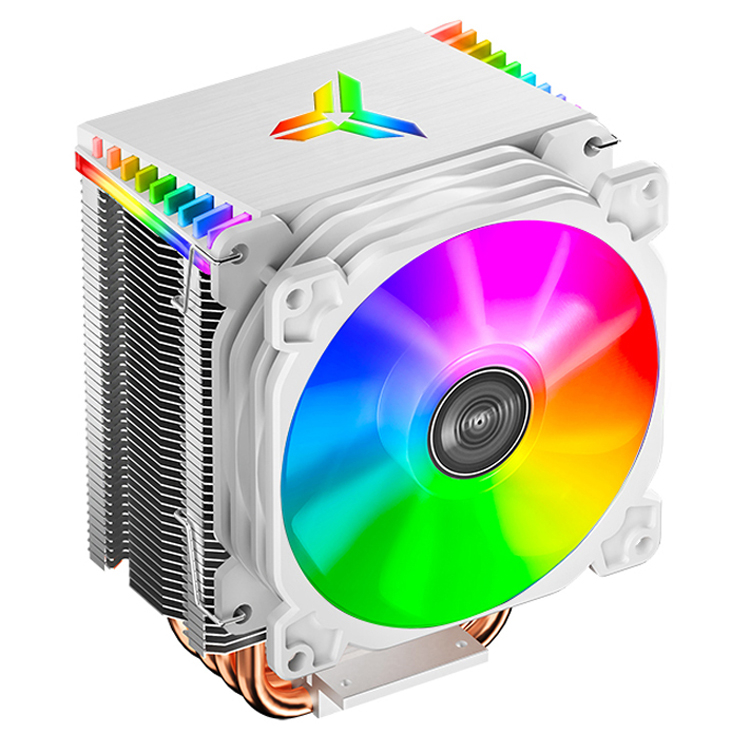 Jonsbo expanded its range of universal CPU coolers with the announcement of the model called CR-1400 ARGB White.The new product has a traditional tower design.Image source: JonsboThe product features a heat sink with four copper U-shaped heat pipes running through it with direct contact with the CPU cover.This design increases the efficiency of heat dissipation.There is a 92mm diameter fan on the side.The speed of the seven blade fan is controlled by pulse-width modulation (PWM) from 900 to 2300 rpm.It creates up to 61 cubic meters of air per hour with a noise level not exceeding 30.5 dBA.The cooler is equipped with a multicolor addressable backlight.You can synchronize the effects with other computer components through a compatible motherboard.The novelty is made in white color.The total height of the product is 126 mm.It is possible to use this cooler with AMD AM4 processors and also with Intel LGA115X/1200/1700 chips. 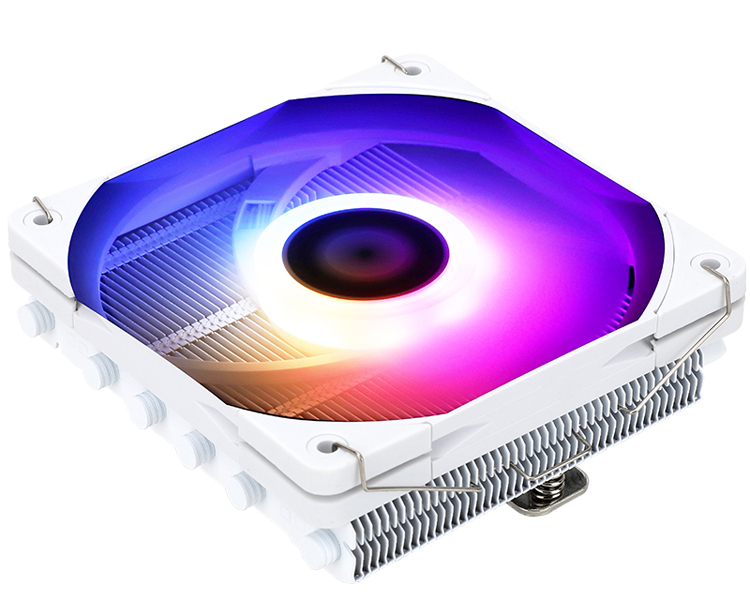 Thermalright announced the AXP120-X67 White ARGB CPU cooler.The new product has a low-profile design, so it is suitable for compact desktop PCs - for example, based on Mini-ITX motherboard size.Image source: ThermalrightThe \"flow from above\" format is equipped with a radiator, through which go six heat pipes with diameter of 6 mm.At the base is a C1100 nickel plated copper plate and the TL-C12015W-S fan with 120mm diameter is responsible for the air cooling.The fan speed is controlled by the pulse-width modulation (PWM): the maximum speed is 1800 rpm.An airflow of up to 100 cubic meters per hour is generated.Static pressure up to 1.36 mm water column.The noise level does not exceed 26.1 dBA.The cooler is completely made in white.This applies in particular to the heat pipes and the fan guard.There is a bright addressable ARGB backlight.The product is compatible to AMD AM4 and Intel chips with LGA 115X/1200/1700/2011/-3/2066 socket.The total height of the new product is 67mm.