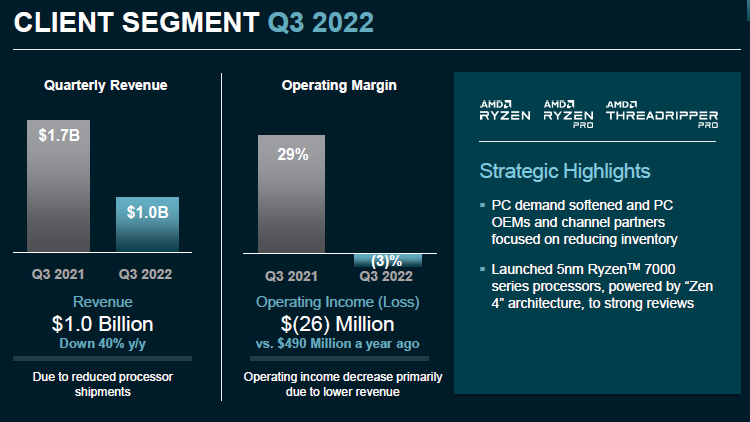 AMD quarterly report was released a few hours ago, and in terms of revenue dynamics only slightly disappointed analysts, who were ready for the loss of the former momentum of the PC market.The company's total revenue was up 29% year-over-year, but in the consumer segment it collapsed by 40% due to Ryzen processors, and had to end the quarter with operating losses in this area.Image source: AMDNet revenue for AMD fell 93% to $66 million, but the company attributes this to the costs associated with the Xilinx takeover deal.At the end of the quarter AMD's revenue was $5.6 billion, and while a 29% increase in annualized terms cannot be characteristic of previous quarters, it still looks decent against the backdrop of competitors.Profit margin decreased during the year from 48% to 42%, operating expenses increased by 113% to $2.43 billion, and the quarter ended with an operating loss of $64 million.The company explains this by the growth of expenses on research and development, as well as by the consequences of the Xilinx takeover deal.Due to the need to reduce inventories and review product prices in the past quarter AMD lost at least $ 160 million.Image source: AMDAs the head of the company Lisa Su (Lisa Su) said at the conference call, \"the third quarter was worse than we expected because of the deteriorating PC market and a significant correction of inventories in the supply chain in this segment.In fact, the value of inventory at the end of the quarter increased 77% to $3.37 billion.Even in such a difficult environment, the CEO added, the company managed to increase revenue in the data center, embedded and gaming solutions segments.At least in the area of game consoles there was a positive trend.Image source: AMDIn the segment of data centers revenue grew by 45% year on year to $1.6 billion due to the popularity of central processors EPYC family.Operating profit rose from $308 million to $505 million, and the operating margin rose from 28% to 31%.The past quarter was AMD's tenth consecutive quarter in which its server processor sales volumes in cash terms broke a record.EPYC processors of new Genoa generation are in high demand, as pointed out by AMD, although their formal announcement is only scheduled for November 10.Shipments of Xilinx Programmable Matrixes and Pensando Computing Accelerators are up noticeably.Lisa Su said she expects revenue growth in the server segment next year, especially cloud solutions in the U.S., but the Chinese market will be weak.Image source: AMDIn the client segment, AMD saw a 40% drop in revenue to $1 billion compared to the same quarter last year.Processor shipments declined due to inventory surpluses while demand in the PC market declined, all of which resulted in an operating loss of $26 million in the segment.Nevertheless, the shift in the supply mix in favor of the more expensive Ryzen desktop models allowed the average selling price to increase year-over-year.The company only needs to add that the Ryzen 7000 processors with Zen 4 architecture introduced in the last quarter received praise in published reviews.By the end of 2023, according to Lisa Suh, the capacity of the PC market should shrink by 10%.This year, the market will shrink by the full 20%.Image source: AMDIn the gaming segment, which recently includes both graphics cards and components for gaming consoles, AMD managed to increase revenues by 14% year-on-year to $1.6 billion.While revenues in the direction of graphics cards declined, gaming consoles provided a positive trend, partially compensating for this.In fact, gaming console components have been breaking revenue records for six consecutive quarters.Operating profit in this segment fell from $231 million to $142 million.The company had to generate less revenue from graphics solutions and faced increased inventory, as well as downward price adjustments.The operating profit margin dropped from 16% to 9%.Gaming consoles were in high demand because of Microsoft and Sony's preparations for the new season.On the profile slide of the presentation AMD also did not forget to mention the preparation for the announcement of graphics solutions generation RDNA 3 with chips produced by 5nm technology.Novelties are to significantly increase performance compared to current generation products.As expected, they will be presented this week.AMD's revenue in the segment of embedded solutions grew by an impressive 1549% to $ 1.3 billion as a result of changes in the accounting structure and the acquisition of Xilinx at the beginning of the current 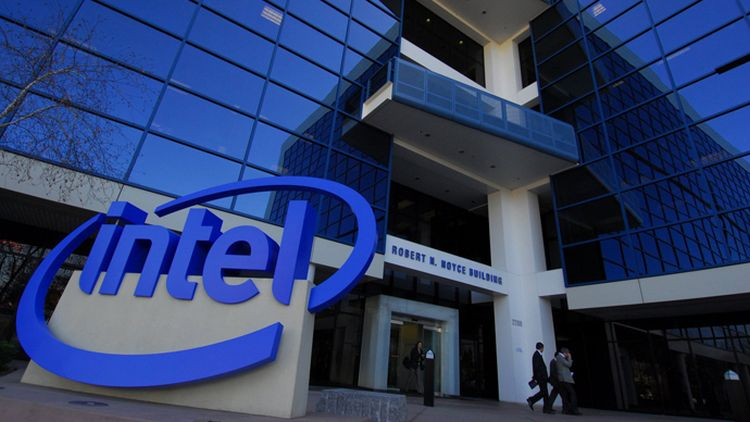 Intel is due to report its third-quarter financial results later this month, and the event will be preceded by a painful decision for the company to cut staff, according to knowledgeable sources.The number could run into thousands of layoffs, with some divisions losing up to 20 percent of their jobs.Source image: IntelInformation about the impending downsizing at Intel was released this week by Bloomberg, but concerns about its inevitability have previously been expressed by anonymous company employees on social media pages.As of the end of July, Intel had 113,700 employees, as many semiconductor companies had stopped hiring this summer, and at the previous quarterly conference, the CFO said Intel would be forced to cut costs in the third quarter of this year.By some estimates, Intel units will lose one in five employees in some cases, but that is more true for professionals in sales and marketing.Analysts at Gartner and IDC reported this week that PC and laptop sales were down 15% or 20% in the third quarter compared to the same period last year.Intel still depends about half of its revenue on the PC segment, so current market trends are undermining the company's financial performance.According to Intel's own forecasts, its year-end revenue could decline by $11 billion from expectations.Third-party analysts believe Intel's third-quarter revenue will fall about 15%.Intel's profit margin is also approaching 45% versus its historical 60%.In such circumstances, it is necessary to take measures to reduce costs, and laying off some staff is the traditional way to achieve it.Intel's fixed costs could reach $25 or $30 billion, according to some experts, and staff cuts would reduce that amount by an amount of 10 to 15%.Intel's previous major downsizing took place in 2016, when about 11 percent or 12,000 employees lost their jobs.Intel's stock price has fallen more than 50 percent this year, and it lost 20 percent in the last month alone.Management needs to show resolve in the fight to cut costs in order to gain investor confidence.Dividend payments are also in question, but the public offering of its Mobileye subsidiary should provide Intel with an influx of capital, which is good news amid such a gloomy trend. 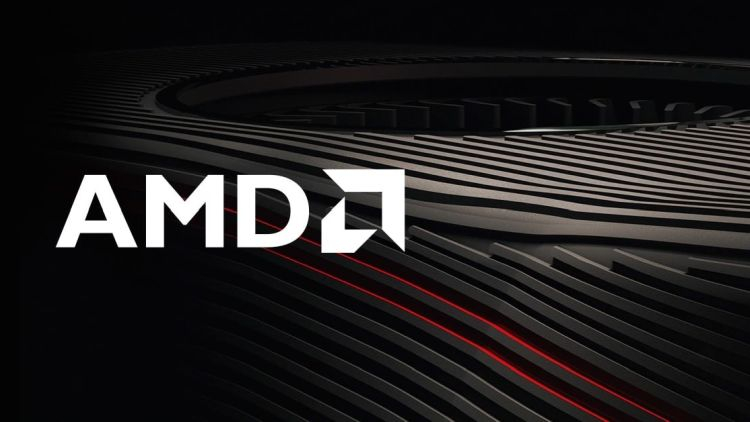 AMD commented on gaming graphics: \"the market is a mess, but new products will help us\"

Unlike NVIDIA, which was even forced to announce early financial results for the second quarter due to a sharp decline in demand for its gaming graphics cards, AMD on the consumer graphics market was quite restrained, expressing hope for its growth in the fourth quarter.The general line of AMD management adheres to now, but points out that the consumer graphics market is a mess.Image source: AMDSimilar statements could be heard from AMD senior vice president Ruth Cotter (Ruth Cotter), which took part in the technology conference Goldman Sachs.She began her explanation by recalling AMD's recent restructuring of its financial statements.If earlier the semi-custom solutions, in particular, chips for game consoles belonged to the server line of business, now they are relegated to the gaming direction, neighboring it with discrete graphics processors.These two segments in the last quarter, according to the representative of AMD, developed multidirectionally.Demand for Microsoft and Sony game consoles at this stage of their life cycle is very high, as Ruth Kotter admits, and due to this growth in total revenue in this area will continue.At the same time in the discrete graphics segment, according to her, the company entered into 2022 with a very high base for comparison in the form of 2021.In the second quarter, the market sagged hard, as has been discussed extensively by other sources.The supply/demand ratio changed as consumer spending declined amid macroeconomic instability, all of which affected the discrete graphics market.In the second half of the year, specifically in the third quarter, as Ruth Kotter emphasized, the gaming graphics card market will continue to show weak demand as increased inventory remains in the retail channels.But the fourth quarter should bring positive changes for AMD.By the end of this year, the company will release a new product for gamers, and its appearance can help straighten out the situation.With all that said, as Ruth Kotter added, the second half of the year will force the company \"to deal with all kinds of peripeteia and confusion in the consumer graphics market.\" Directly AMD will help announce new products, but how will the situation in 2023, it is too early to say.AMD representatives also explained that in the server segment is very high demand for the company's products, as in the segment of gaming consoles, and only in market segments related to the consumer sector, the company has to deal with great confusion and try to overcome all sorts of related problems. In late April there was a serious shortage of fuel for cars on the territory of Ukraine, the reason was problems with logistics due to the \"special operation\".Japan decided to lend a helping hand in a difficult time, and is going to help with the solution of the fuel crisis.This was reported by the press service of the Ministry of Economy of Ukraine in cooperation with the Japanese.So far, Ukrainian drivers have to stand in kilometer-long queues waiting for fuel, and they can only get a limited amount of fuel.The government is actively working to solve the problem, especially in negotiations with other countries. As part of the negotiations, an agreement was reached with wealthy Japan.As it became known, Japanese companies can deliver fuel to Ukraine, this was said by the Minister of Economy and Trade of Japan, after negotiations with the government of Ukraine.Also Japan can increase the delivery of electric cars in the country to solve the problem with shortages.Meanwhile, the Minister of Economy of Ukraine has counted the necessary amount of fuel in May - 300 thousand tons of diesel and 120 thousand tons of gasoline.Contracts for the required amount of fuel are already ready, all that remains is to solve the problem with the supply of fuel to the country, as there are huge problems with logistics, supplies can literally be delivered only from Poland.For the post rewardedThis material is written by a site visitor, and it is rewarded.