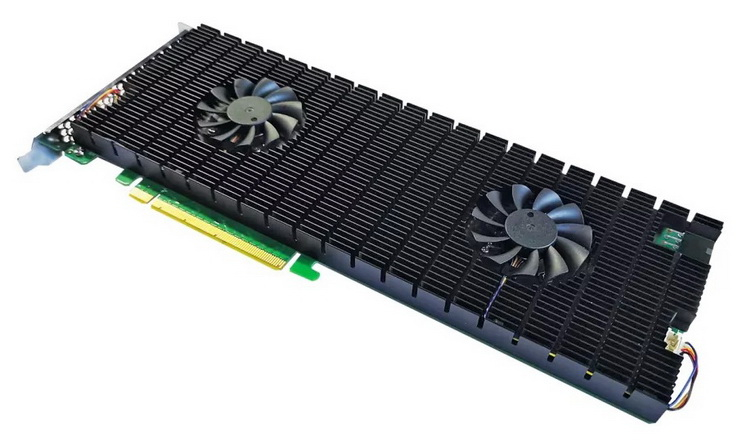 HighPoint has announced new SSD7140A and SSD7540 PCIe expansion cards designed to build RAID arrays from M.2 NVMe SSDs, the former working with PCIe 3.0 x16 interface, the latter with PCIe 4.0 x16.Both support installation of up to eight SSDs.Image source: HighPointA HighPoint SSD7140A and SSD7540 cards can be combined in RAID 0, RAID 1 or RAID 10.The first type is designed for maximum performance, the second for data backup, and the third is a combination of the first two.Also offered is support for JBOD mode, which allows you to combine all installed drives into a single disk volume.The controllers used in the expansion cards support the installation of up to eight M.2 SSDs.However, only four fast SSDs are sufficient for maximum throughput.Each NVMe drive uses four PCIe lines.Each expansion card offers support for 16 lines.An additional four M.2 slots on the expansion cards allow for more total array capacity. The dimensions of the HighPoint SSD7140A and SSD7540 expansion cards are 285 × 111 × 21 mm.They are equipped with cooling systems consisting of large aluminum radiators and two fans.The size of the latter is not specified, but they are probably up to 40mm in diameter.Since the HighPoint SSD7140A has a PCIe 3.0 interface, it can only provide a maximum data transfer rate of up to 14,000 Mbytes/s.The HighPoint SSD7540 with the PCIe 4.0 interface offers double that, at 28,000 Mbytes/s.However, you can combine two expansion cards of the same model into a Cross-Sync configuration, nearly doubling the speed, if desired.So with two PCIe 3.0 cards, you can get transfer speeds of up to 28,000 Mbytes/s, and for the PCIe 4.0 model, almost 56,000 Mbytes/s.The HighPoint SSD7140A has a recommended price of $729.The HighPoint SSD7540 with PCIe 4.0 interface is priced at $1099.Both novelties can work in Windows and Linux operating systems.