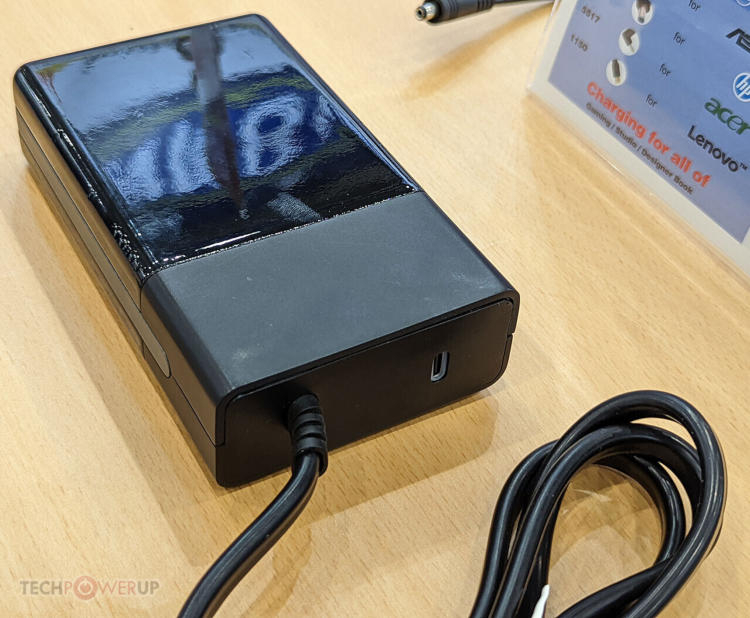 Despite nearly empty pavilions at this year's Computex 2022 in Taipei, journalists from TechPowerUp found a curious booth from Chinese company Wii Power (no relation to Nintendo), which showed off several gallium nitride (GaN) cell-based chargers.Image source: techpowerup.comGaN-cell chargers offer high power at a fairly modest physical size, and the technology promises to dominate the market in the coming years.The most powerful charger in the range of the Chinese manufacturer was 340W - these have not yet been on the market.It is presumably a pre-production prototype, besides it is rather bulky - 150 × 86 × 34 mm, though this is excusable if you consider that it outputs up to 17 A at 20 V.The device is equipped with a USB Type-C port with USB PD support and a set of other connectors that deliver up to 45 watts.Another charger has output power up to 240 watts, but offers more interesting connectivity options.The first USB Type-C port has 140 watts and the second port has 100 watts.Then you can connect both cables to the adapter and get all the available 240 watts at the output.And adapters are available for different laptops.There is also a third USB Type-C port and a USB Type-A connector for connecting less power-hungry consumers like smartphones.There is also a built-in display on board, which displays voltage, current and power readings.The device is also quite bulky (130 × 80 × 32 mm), but not for its capabilities.Finally, it is worth noting and the third exhibition sample - a compact charger rated at 140W (28V, 5A), which will be convenient to take with you on the road.It is unlikely that any of these chargers will be at retail in the near future, but in the somewhat more distant future with the spread of GaN technology the number of such offers will definitely grow.

HDPlex has unveiled an ultra-compact HDPlex 250W ATX PSU.Its dimensions are 170 × 50 × 25 mm, which means that except for thickness, it's slightly larger than a typical smartphone.And at the same time has a power of 250W.Image source: HDPlexThe device drew the attention of the portal Fanless Tech, which notes that two such power supply can be synchronized and used in a gaming PC.One will be responsible for the CPU, motherboard and other components, and the second - for powering the graphics card.Novelty from HDPlex uses a passive cooling system, an element of which is its aluminum housing.The efficiency is claimed to be 94%.The device will perfectly fit into a very compact desktop PC.The secret of the HDPlex 250W ATX PSU small size is the use of gallium nitride (GaN) transistors in the PFC and LLC converter stages.The same material can be found today in very powerful chargers of some models of smartphones and laptops, which allow the implementation of fast charging technology and recharge the battery in just a few tens of minutes.The HDPlex is scheduled to go on sale in June of this year.The manufacturer has priced it at $145.At the same time, the company offers free shipping worldwide.The HDPlex 250W ATX PSU comes with a cable for synchronizing devices, as well as five modular power wires for motherboard, CPU, graphics card and other devices with Molex 4-pin power connector.