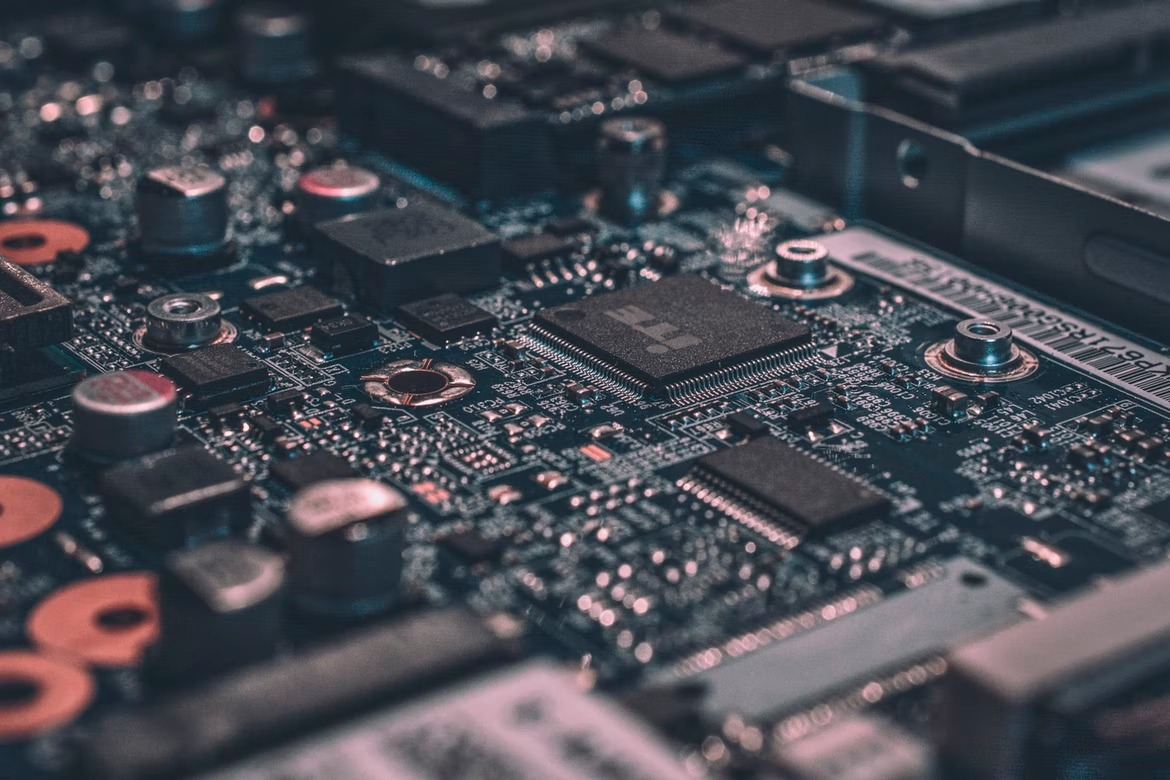 Analyst firm IC Insights has unveiled a fresh forecast for the global microprocessor market.It expects global sales of such chips to grow by double-digit percentages in 2022, despite global economic challenges.Image sources: Alexandre Debiève/unsplash.comAll microprocessor sales in 2022 will grow 12 percent over last year to a record $114.8 billion, largely due to rising average semiconductor prices.In 2021, processor sales soared by 13%, and in 2020, due to a surge in demand for portable electronics due to the COVID-19 pandemic - and at all by 16%.2022 will be delivered a record number of microprocessors in history - about 2.5 million units, or 3% more in unit terms compared to the previous year.Sales in units are up 6% in 2021, and up 5% in 2020 before that.According to IC Insights, the growth of revenues due to the jump in average prices for products of this type by 8%.The composition of the top five processor manufacturers in 2021 has not changed compared to 2020, the total revenue grew by 15% to $88.3 billion.The largest producer in 2021 was Intel with a market share of 50.9%, followed by Apple with 13% and Qualcomm with 9.1%.AMD and MediaTek rounded out the top five.At the same time, the gap in profitability between the leading player of the top five and other companies continues to shrink.If Intel's revenue in 2021 increased by 3% to $52.3 billion, the revenue of AMD, which produces processors on x86-architecture, increased immediately by 56% to $9.2 billion.In general, five leaders in 2021 owned 86% of the market share.From fifth to tenth place are located NVIDIA, Samsung, Unisoc, HiSilicon and NXP, which together accounted for 4.3% against 5% in 2020. 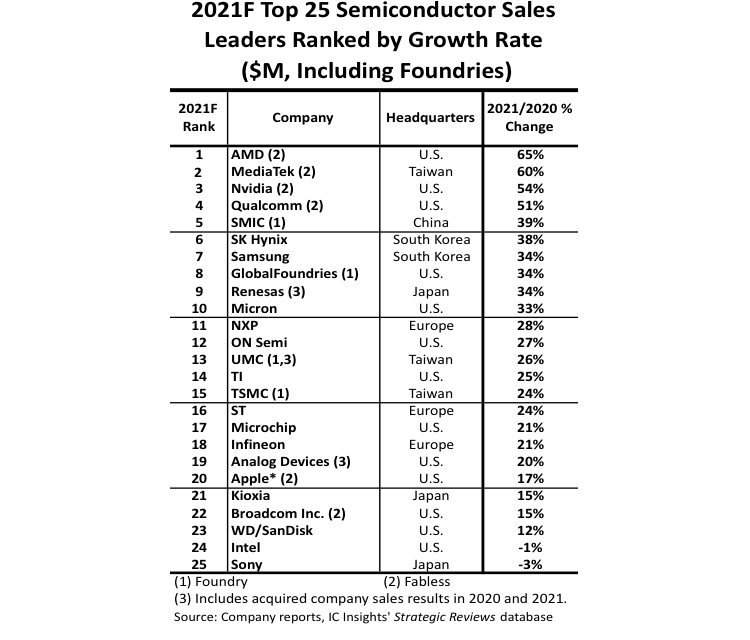 AMD predicted record revenue growth among all chip makers, while Intel will be among the worst

IC Insights analysts published revenue growth forecast among chip makers by the end of 2021. The list is topped by AMD, which is expected to post 65% year-over-year revenue growth. According to analysts, the company has excellent results in all markets, including consumer, professional and high-performance computing market & ; and this applies to both central and graphics processors.

The overall numbers indicate clear growth in the industry as a whole, with an average increase in revenue of 23 %. This figure is made up of a 20 percent increase in shipments (number of sales) and a 3 percent increase in average selling price (ASP). That pace has not been faster since 2010, when the electronics components industry grew 33% year-over-year following the global recession of 2008–2009. The outsiders of the rating are Intel, whose revenue in 2021 may fall by 1 %, and Sony, which can lose 3 %. The first place in the list was taken by AMD, which was predicted to grow by 65 %. The company managed to take a comfortable place in the consumer market, but the explosive increase in its revenues is associated with the growth of the average selling price: the company conquered the server market with EPYC processors. In the segment of high-performance computing, the number of systems on AMD platforms has doubled: in the TOP500 supercomputer ranking there are 49, compared with 21 in 2020. The second place in the ranking of revenue growth forecasts was occupied by Taiwanese MediaTek with the result of 60 %. Third was NVIDIA (54 %), fourth & ; Qualcomm (51 %), fifth & ; SMIC (39 %). Here it is worth noting that the first four places out of five went to chipmakers without their own production facilities. At the same time Taiwan TSMC, which is now considered the most powerful player in contract manufacturing, closes the third five with a growth forecast of 21 %. WD & ; only 12 % is the smallest positive indicator.

The first with lquo;negative growth» was Intel, which IC Insights analysts predicted a decline in revenue by 1 % compared to 2020. Even the new program IFS (Intel Foundry Service), in the framework of which the company decided to start contract manufacturing of components for other market players, could not help to avoid a negative result. Intel now has a lot of problems: it is being squeezed by AMD, NVIDIA and Arm from different fronts, and has to reckon with the decline in supply and change the strategy. At the same time, the company's projected revenue for 2021 is $77 billion, which is still significantly different from AMD at $15 billion. The last in the list was Sony, the revenues of which may fall by 3 % in 2021, despite the fact that PlayStation 5 is not stale on the shelves. The Japanese company could not offer anything solid against the global shortage of semiconductor components and the high demand for its products & ; as a result, it had to reduce the forecast for the production of consoles by 1 million units until March 2022. Judging by IC Insights, the semiconductor market is experiencing a surge in growth not seen in 11 years. It's encouraging that this is coming at the expense of increased shipments rather than ASPs, boding well for the consumer and professional markets.