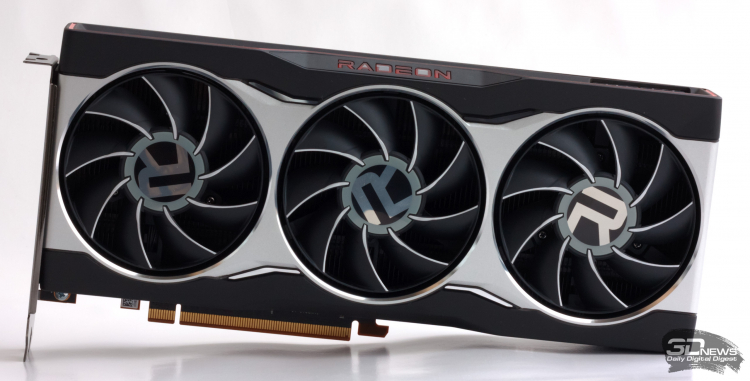 Radeon RX 6800 and RX 6800 XT will start selling on Wednesday, and today AMD has allowed to show the cards in details.

The long-awaited Radeon 6000 series graphics cards on a large Navi chip mean extremely much to the AMD graphics division. Firstly, they will help the company regain its long-lost position in the high-performance gaming gas pedal sector, and secondly, the second-generation RDNA architecture will bring a host of new features not found in first-generation Navi chips, including full DitectX 12 Ultimate compatibility and hardware-accelerated ray tracing. 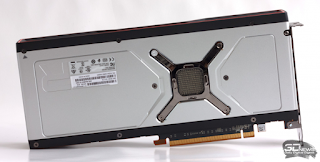 AMD has announced three Navi 21-based offerings at once, the junior models under the Radeon RX 6800 and Radeon RX 6800 XT brands are expected to go on sale on November 18th with recommended prices of $579 and $649, respectively, and their closest competitors among NVIDIA devices are GeForce RTX 3070 and RTX3080, valued at $499 and $699. The launch of the flagship model in the new family, the Radeon RX 5900 XT, which will cost $999 and promises performance in the same category as the GeForce RTX 3090, is scheduled for a later date, December 8. 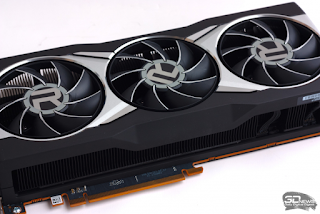 The premiere of the Radeon RX 6800 and Radeon RX 6800 XT is based on reference devices, followed by partnership varieties with PCBs and original cooling systems. Tests of novelties in games and professional applications are already in full swing, and in two days - Wednesday at 17:00 Moscow time - we will be able to discuss their results. And today the chipmaker has allowed a public inspection of new products - alas, without an autopsy, this too will have to be left for later. 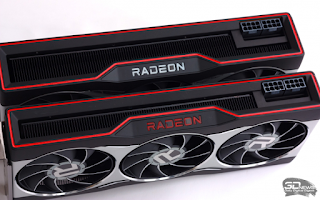 Radeon RX 6800, on the one hand, and RX 6800 XT and RX 6900 XT, on the other hand, serve similar cooling systems, which differ mainly in size and, accordingly, the depth of radiators. The younger model occupies strictly two expansion slots in the PC case, the older one - two and a half, and the other dimensions are the same. The length of devices is 267 mm, so they will fit into almost any modern case. At the same time, video cards weigh a lot because of the large radiator, which covers almost the entire area of the PCB, and the metal casing: Radeon RX 6800 pulls on 1397, and XT - 1517. 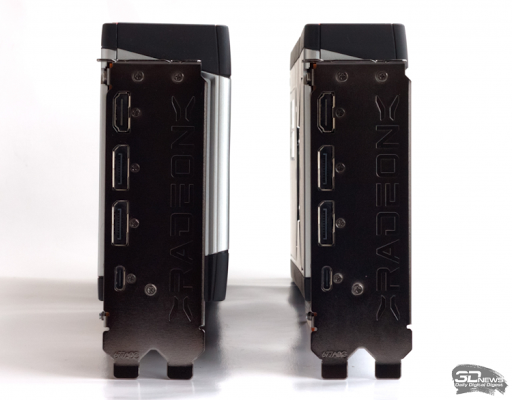 The open design cooler with three 80mm diameter fans gives the impression of knowingly more efficient solution than the Radeon RX 5700 and RX 5700 XT turbine. The blades of each fan are gripped by a ring, which increases the air pressure in an axial direction. At low heat emission, they stop and the device cools passively. And under high load, as AMD assures, the new cooler runs at 6 dBA quieter than the reference CO of the previous generation.

The casing of the cooler is designed so that the heated air leaves the fan perpendicular to the long sides of the cooler. The mounting plate is deaf here, but it's not a problem: the fin block is still perpendicular to it. Only the large projection with the Radeon logo, which partially covers the airflow in the center, is confusing - more so for the basic model Radeon RX 6800, which is less deep.

Also note that AMD has changed one of its DisplayPort outputs to a USB Type-C for simultaneous signal transmission and power supply to the virtual reality helmets within the VirtualLink standard. VirtualLink technology itself has not been widely adopted despite support from NVIDIA and VR device manufacturers. But in any case, the tiny connector can still be used as a regular USB 3.1 Gen 2 connector, including DisplayPort forward mode.

In general, as a result of a brief inspection, we can confidently say that AMD has advanced in the design of reference graphics cards and cooling system design since the noisy and hot Radeon RX 5700 and 5700 XT. The main thing to ensure adequate ventilation of the computer case: the novelties develop a serious power of 250-300 W, and all the heat remains inside the PC. Do not forget to return to 3DNews at five pm (Moscow time) on November 18 to read a full overview of Radeon RX 6800 and Radeon RX 6800 XT.

In the Chinese media space were published very interesting photos of an unusual sample Radeon RX 6800 XT graphics card. Interest in the images was caused by the fact that the graphics gas pedal is fully made in black. As it turned out later, the photo shows a special version of Radeon RX 6800 XT, which Lenovo uses in its desktop gaming computers.

The fact that the photo shows exactly the Radeon RX 6800XT model, indicates the size of the graphics card cooling system, or rather its thickness.

Recall that the AMD graphics cards RX 6800 XT, RX 6800 and RX 6900 XT itself contain silver inserts on the front side of the housing of the cooling system, and use a silver back plate.

There is also a change in the color of the casing edging on the top of the graphics card. In the original design, it is red. In the published photo & ; black. As sources indicate, black Radeon RX 6800 XT was produced by Sapphire. And it seems that the only difference from the reference version of this model is a different color of the cooling system casing. In one of the photos, black Radeon RX 6800 XT is located next to the GeForce RTX 3070, for which Lenovo has developed its own cooling system with two fans. One of Lenovo's representatives also published photos of a black Radeon RX 6800 XT as part of a gaming computer. Apparently, the graphics card logo has LED backlighting. The Radeon RX 6800 XT is based on the Navi 21 XT GPU with 4608 stream processors, 288 texture blocks and 128 raster blocks. The series of new Radeon graphics gas pedals is based on the RDNA 2 architecture, one of the features of which is the emergence of the so-called Real Time Beam Accelerators (Ray Accelerators), which are part of each Compute Unit of the graphics core. They perform the same function as the RT cores of GeForce RTX 20-series and the latest 30-series graphics cards. All currently available Radeon 6000 Series graphics cards feature 16GB of GDDR6 video memory as well as 128 MB of Infinity Cache fast buffer memory, which increases the bandwidth of the main memory stack. The Radeon RX 6800 XT and RX 6800 benchmarks will be available on November 18th. Recommended price for the former is $649, the latter $579. According to the ASUS company representative, at the start of sales video cards will be available in limited quantities. Approximately one week– two reference versions should also be expected to start selling non-standard versions of these graphics gas pedals. Nothing is yet known about what kind of camp the above black model Radeon RX 6800 XT belongs to. The flagship of the series Radeon RX 6000 & ; model Radeon RX 6900 XT will go on sale on December 8. The recommended price for the graphics card is $999.