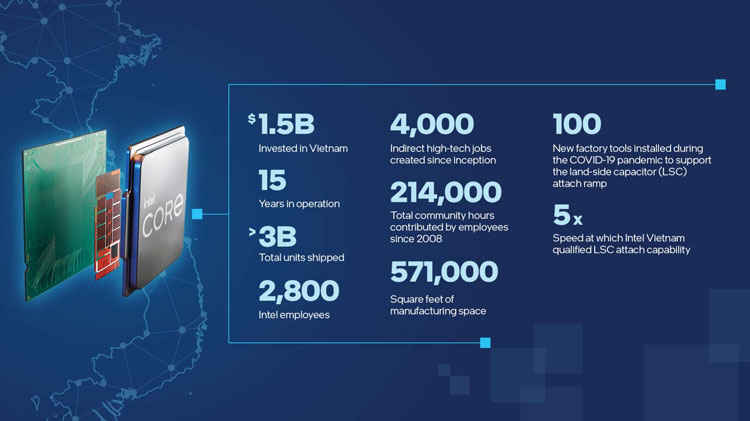 Vietnamese Intel learned how to prepare processor substrates themselves

As you know, the COVID-19 pandemic led to a shortage of all sorts of microchips.Logistics went down and demand for electronics went up.Intel in 2021 did a lot to ease the shortage of its main product, processors.A significant step along the way was the expansion of processor substrate preparation at the company's assembly plant in Vietnam.Image source: IntelThe Ajinomoto build-up film (ABF) substrates are a combination of about 10 layers of glass fiber with contact groups on the bottom and top and multiple conductors inside.The substrates serve as a base to mount the processor chip and as a safeguard to protect it from damage.The substrate at the bottom carries a group of pins to fit into the processor socket on the motherboard, and the top is covered by a heat dissipating cover.Also, surface mount capacitors are soldered on both sides of the substrate to reduce noise and to stabilize the processor power.Traditionally, Intel bought processor substrates with capacitors already soldered on one side.At the Vietnam plant where the processors are assembled and tested, capacitors were soldered to the other side during final assembly of the processors.But supply disruptions caused by the pandemic forced the company to take on the task of preparing the substrates for the assembly of processors, namely to unsolder capacitors on both sides of the substrate.In 2021, the company purchased a hundred pieces of special equipment for the plant in Vietnam and organized there a complete process of preparing the substrates for final assembly.Since then, the company does not need intermediaries to perform such work, and this allowed it not only to maintain production volumes, but even to produce products in excess of the plan, even in the face of logistical problems and shortages.According to Intel, it was able to produce millions of additional processor units in just over a year.\"This initiative is a terrific example of how integrated manufacturing is at the core of Intel's success.Our global network of factories and ecosystem of suppliers directly enables a more adaptable and sustainable supply of products.Last year, when the industry experienced a substrate shortage, our ability to leverage internal capacity generated over $2 billion in revenue growth, allowing us to respond quickly to dynamic customer demand,\" said Keyvan Esfarjani, executive vice president and chief global operations officer at Intel.In just 15 years of operations in Vietnam, Intel has invested $1.5 billion in manufacturing.By the end of 2021, the facility had delivered over 3 billion processors to market.Jobs are provided for 2,800 employees and about 4,000 more specialized jobs have been created around the factory infrastructure.