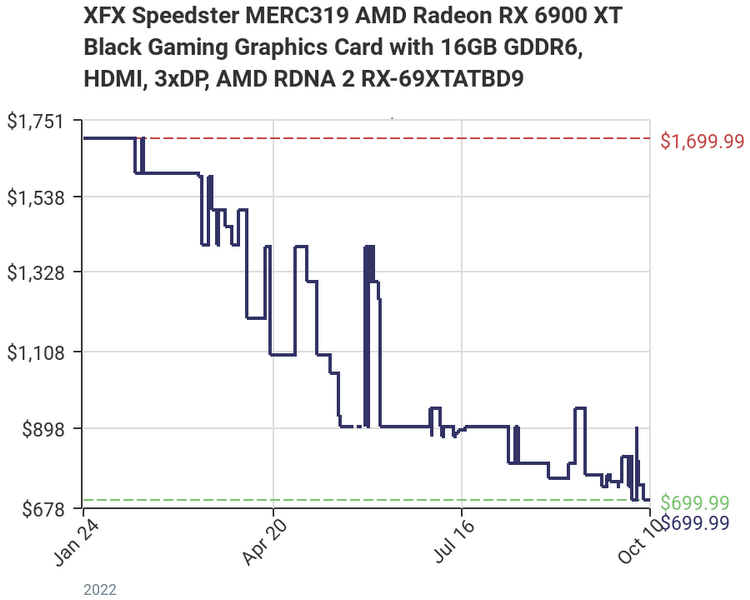 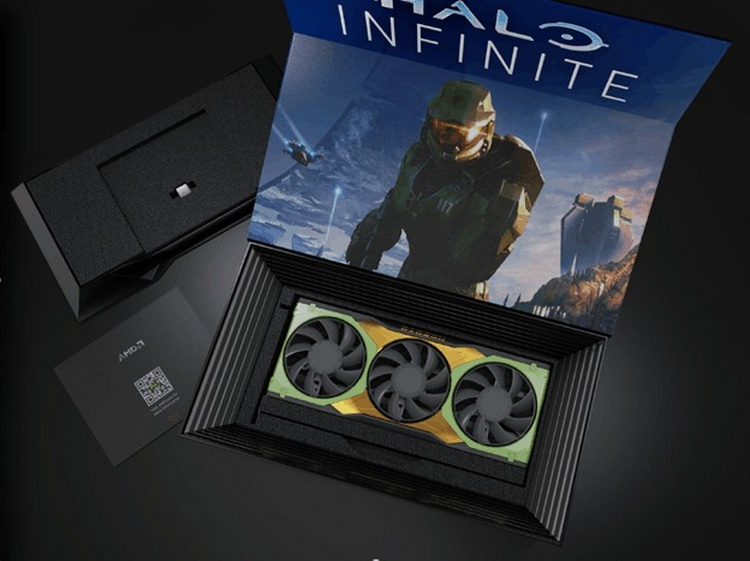 AMD and Microsoft will be releasing a limited edition Radeon RX 6900 XT Halo Infinite Limited Edition graphics gas pedal, based on the upcoming game Halo Infinite. The card features a reference cooling system, which is painted in the colors of the Mjolnir Powered Assault Armor Mark VII, the protagonist of the game Master Cheef.

Both companies have not reported the specifications of the video card, but it is very likely that they repeat the reference specifications. To recap briefly, the Radeon RX 6900 XT is based on the Navi 21 XTX chip based on the AMD RDNA 2 graphics architecture. It consists of 80 execution blocks with 5,120 stream processors, 80 ray tracing acceleration blocks, 320 texture blocks and 128 rasterization blocks. The GPU's benchmark operating frequency range is from 2015 (gaming) to 2250 (max) MHz.

Developer studio 343 Industries, which created Halo Infinite, worked closely with AMD, so the game is optimized for use with Ryzen processors and Radeon graphics cards. Support for FreeSync Premium Pro is announced, but ray tracing support will be added after the game's release with one of the patches. On the possible support for AMD FidelityFX Super Resolution (FSR) or NVIDIA Deep Learning Super Sampling (DLSS) smart scaling technologies is still unknown.

Halo Infinite on PC will support extra wide monitors (you can move interface elements anywhere you want), it will come with built-in anticheat and will be synchronized with RGB backlighting of input devices. Saves in PC version of Halo Infinite can be transferred to the console and vice versa, as well as the progress in online mode.

On October 26 AMD is going to launch a promotion, in which customers of certain Radeon graphics cards and Ryzen processors will be able to get a monthly subscription to Xbox Game Pass gaming service for PC as a gift. As for the game Halo Infinite itself, it will be released on December 8 this year for PC (Steam, Microsoft Store), Xbox One, Xbox Series X and S. 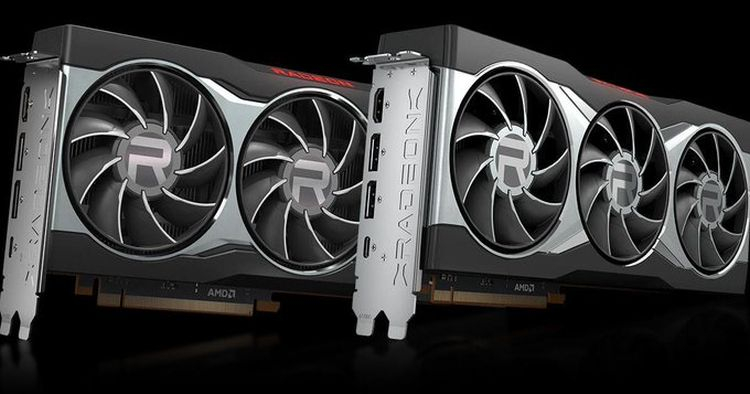 Many end consumers have seen the new AMD and NVIDIA graphics cards this half year only in the price lists of online stores in the neighborhood with inflated prices. Now familiar with the plans of AMD sources say that production of reference versions of Radeon RX 6900 XT, Radeon RX 6800 XT and Radeon RX 6800 has been discontinued.

As early as last month, our own sources reported anonymously that AMD's plan was to supply reference graphics cards within approximately two weeks of the start of sales of the respective models, then they were to give way to partner products that relied on their own graphics card design. Cowcotland reports that production of reference versions of Radeon RX 6900 XT, Radeon RX 6800 XT and Radeon RX 6800 has been discontinued. Given that video cards are difficult to buy, it is unlikely that they will be present in the price lists of stores for a long time. Soon they should give way to graphics cards in the performance of partners AMD & ; such a scheme of cooperation allows video card manufacturers to earn more from the sale of products, because the reference graphics cards they just resell, getting them in a ready form from AMD. 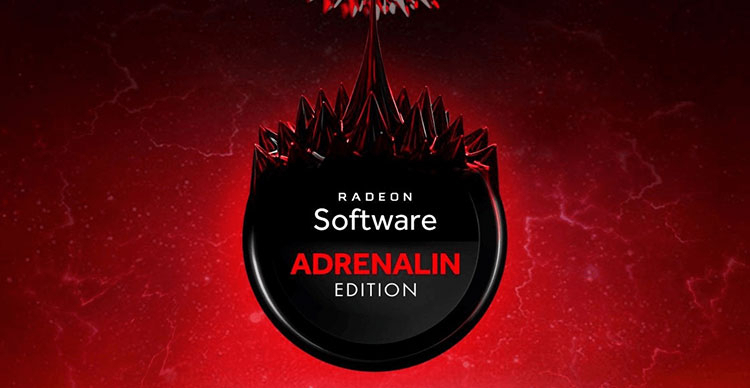 AMD, together with the launch of the Radeon RX 6900 XT flagship graphics card, introduced the driver with its support. The first December driver Radeon Software Adrenalin 2020 Edition 20.12.1 also brought support for the soon to be released role-playing action movie Cyberpunk 2077 from the studio CD Projekt RED.

In addition, AMD engineers have fixed a number of existing problems:

games can hang when running on Radeon RX 6800 gas pedals at frequencies below expected; the HP Reverb G2 VR helmet did not sync or produced a black screen when running the Radeon RX 6800 graphics card; artifacts in Tom Clancy’s Rainbow Six Siege on hybrid graphics systems when using Vulkan on the extended display; problems when trying to change the resolution to a 16:9 ratio in Crossfire; performance overlay and tab «Performanceraquo tuning; misreported higher clock speeds on standby for Radeon  RX 5700 Accelerators.

flickering brightness in some games when Radeon FreeSync is running in window mode without fields; On displays like the Scepter C Series or the Samsung Odyssey G9 Series, the Radeon RX 6000 Series graphics card periodically displays a black screen; display or distortion problems on the Samsung Odyssey G9 C49G95T when setting the resolution to 5120 × 1440 and 240 Hz; failures in Metro Exodus, Shadow of the Tomb Raider, Battlefield V, and Call of Duty: Modern Warfare when ray tracing is enabled; Anisotropic filtering in Radeon Software graphics settings is not applied in DirectX 9 games on RDNA gas pedals; boxless stuttering when connecting a second display and running the Netflix application on RDNA gas pedals; Radeon recording and streaming functions do not work on AMD Radeon HD 7800; changing the HDMI zoom slider causes the frequency to be locked at 30 frames per second; Failures on Polaris and Vega for Oculus Link users; flickering when calling Radeon Software Overlay while Immortals Fenyx Rising is running on the second display; flickering when using MSI Afterburner; performance overlay and tab « performanceraquo tuning; incorrect reporting of higher than expected standby clock speeds on Radeon RX 5700 Series graphics cards; advanced synchronization sometimes causes a black screen.

The Radeon Software Adrenalin 2020 Edition 20.12.1 driver can be downloaded in Windows 7 (64 bits) or Windows 10 (64 bits) versions from the official AMD website or from the Radeon settings menu. The new version is dated December 8 and is intended for video cards and built-in graphics of Radeon HD 7000 family and higher. 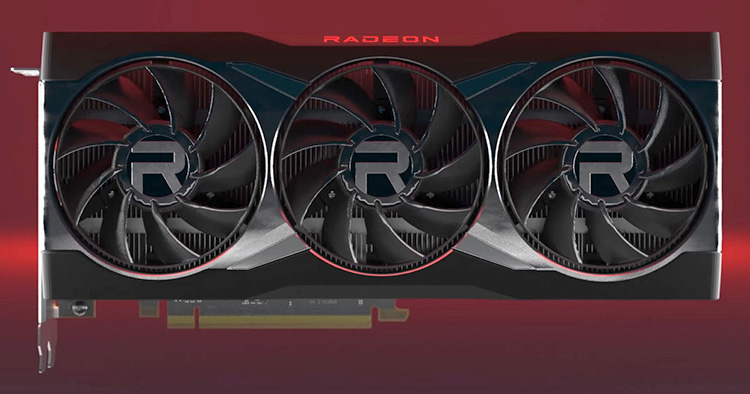 The flagship Radeon RX 6900 XT graphics card will have the highest GPU clock speed of any Big Navi (RDNA 2) gas pedal. At least, according to the data from the informant Patrick Schur, published on Twitter.

According to the screen shots taken in the MorePowerTool utility, the future flagship Big Navi & ; Radeon RX 6900 XT & ; will be able to reach a higher clock frequency limit than graphics cards RX 6800 XT and RX 6800, & ; 3 GHz. The AMD Radeon RX 6800 XT, offering 72 Navi 21 processing units (CU), has a maximum GPU frequency tolerance of 2.8 GHz. This limit seems to be tightly set by AMD itself, and is enforced regardless of the modification of the graphics card by all partners; browsers and extreme overclockers have so far failed to overcome this limit. The restriction may be caused by the desire of AMD to prevent the cheaper model from competing with the much more expensive Radeon RX 6900 XT. If both gas pedals had the same frequency limit, there is a good chance that after overclocking the shortened version could easily approach the RX 6900XT in terms of performance. After all, both models have the same bass frequencies and a TBP (Total Board Power) limit of 300W. The AMD Radeon RX 6900 XT, which will offer 80 processing units, with an increased maximum clock speed limit of 3 GHz can be an excellent choice for overclockers, especially if the AMD will allow partners to produce unattended gas pedals. Overclocker Roman Hartung, known as der8auer, recently published a video in which he tried to overcome the 2.8 GHz limit on PowerColor's RX 6800 XT Red Devil. Unfortunately, despite many attempts, it is impossible to do it without special tools:

The AMD Radeon RX 6900 XT with 5120 streaming processors will compete with an NVIDIA GeForce RTX 3090 graphics card worth $1499. Both cards will surely set new world records for overclocking. Unfortunately, graphics gas pedal manufacturers will not be able to meet the huge demand for high-performance graphics cards, so at the recommended price of $999 will be able to buy 6900XT this year only a few select ones. AMD Radeon RX 6900 XT will officially enter the market on December 8.