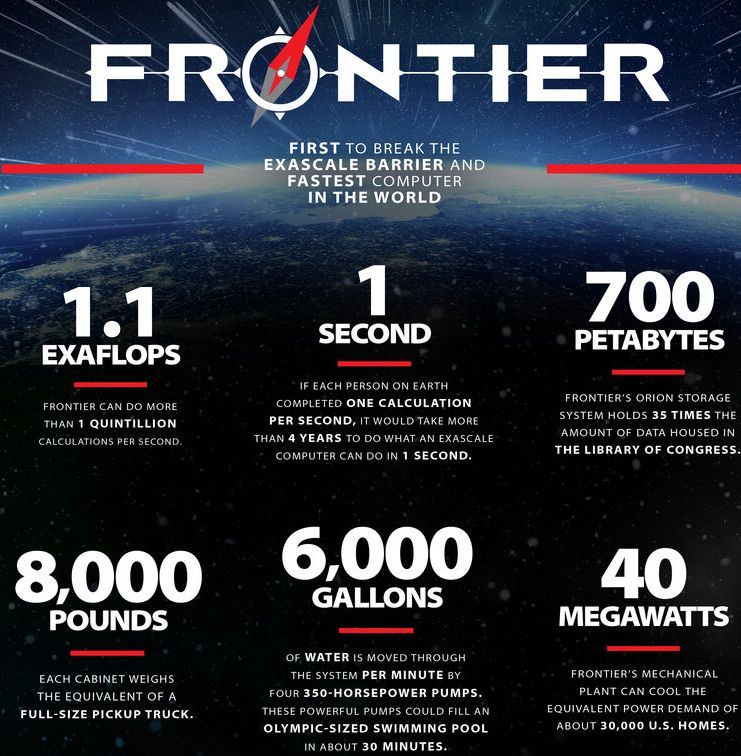 AMD's success in the server market segment was intended to illustrate the new edition of the list of the 500 most powerful supercomputers in the world.The list was topped by the new Frontier system, which combines 9,408 AMD EPYC processors and 37,632 AMD Instinct MI250x gas pedals.Together, they provide a level of performance in excess of one exaflops, allowing for the first time in supercomputer history to break that symbolic barrier.Image source: AMDThe system is capable of delivering up to 1.1 exaflops on a constant basis, with peak performance reaching 1.686 exaflops, according to representatives from the Oak Ridge National Laboratory, which operates the system.Frontier's performance is more than double that of the second supercomputer on the list, and also surpasses the combined performance of the next seven systems on the new edition of the Top500 list.Image source: AMDThe Frontier also managed to get to the second position on the Green500 list, which contains mentions of the most energy-efficient supercomputers.It is headed by the sister system Frontier TDS.High efficiency/energy ratio is made possible by active usage of graphical processors in Instinct MI250x gas pedals, which are four for each AMD EPYC Milan generation CPU with 64 cores and 2GHz base clock frequency.AMD is particularly proud of the fact that its components are used in eight of the ten most energy-efficient supercomputers in the world, and within the top twenty it is present in seventeen systems.Image source: AMDFrontier uses the HPE Cray EX235a platform and occupies 74 racks connected by 144 km of network cabling.Liquid cooling of the components is used, which is also in line with the advanced solutions used in this segment.More than 22 thousand liters of water are pumped through the system per minute, four pumps of 350 hp each are used and are designed to dissipate up to 40 MW of thermal energy.According to AMD, the pumps' capacity would be enough to fill an Olympic-standard (50-meter) pool in just thirty minutes.Each rack weighs more than 3,600 kg, the power consumption of the entire system reaches 21.1 MW, and the storage volume is measured in 700 petabytes.In fact, Frontier is capable of executing over 1 (1018) quintillion floating point operations in a single second.By the end of the year, the first specialists will have access to Frontier's computing power, and full-scale operation will start early next year.The June edition of the Top500 list includes 94 systems based on AMD components, a 95% increase over last year.The recently debuted AMD Instinct MI200 gas pedals managed to fit into seven supercomputers on this list.