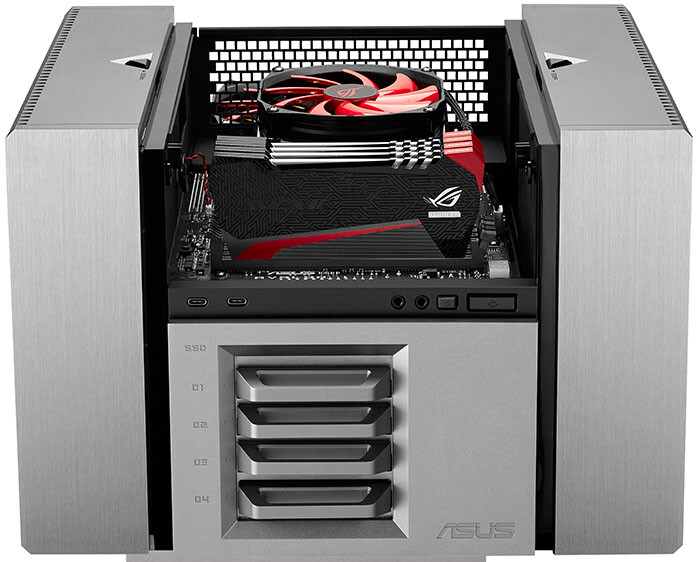 ASUS has shown a futuristic PC concept with almost no wires

Following Gigabyte and MSI, ASUS has decided to show at Computex 2022 its vision of a PC with no power cables visible.Only unlike the first two, which decided to hide the cables as much as possible, ASUS showed a prototype computer that has no cables at all.Almost.Image source: ASUSWhen you first look at the ASUS ROG Avalon computer, you might confuse it with a NAS, or at best a passively cooled HTPC.But both of those assumptions are wrong.A closer look reveals that this is one of the most sophisticated computer system designs ever.The radiators on the sides of the system unit case are actually air vents.On the left side of the ROG Avalon is a full-sized graphics card, which is probably the only item in this build that requires a power cable, unless you count the raiser adapter that connects it to the motherboard.What's hiding in the other side of the case - ASUS does not tell.However, the case itself has been developed in cooperation with InWin.The motherboard in this computer is completely custom.It is about the size of a Mini-ITX.Only four slots for RAM, an M.2 slot and, by all appearances, an LGA 1700 Alder Lake CPU socket stick out of it.Numerous expansion boards are connected to the motherboard from the back side: one to connect the power supply, another board to connect four 2.5-inch drives, the third is the aforementioned raiser for the graphics card.All system components can be quickly and easily replaced.Rear panel of the system unit is also modular.It comes in three variants, named \"Home Theater\", \"Virtual Reality\" and \"Workstation\", which reflect their purpose.The power supply of the computer is made in SFX-format.However, instead of wires, it uses an interface that resembles PCIe.The power supply has a capacity of 600 watts.It can also be quickly replaced if needed without disassembling the whole system unit.The motherboard is also equipped with several connectors for ports on the front panel: two USB Type-C and a pair of 3.5mm audio outputs.There is also one M.2 slot for NVMe storage installation.Another one is also located on one of the expansion boards.Also on the back side of the board you can see the usual power connectors of the board and the processor, and also there is a PCIe x16 slot.ASUS computer concept is really interesting, but it is still unclear whether the company plans to turn it into a consumer product.